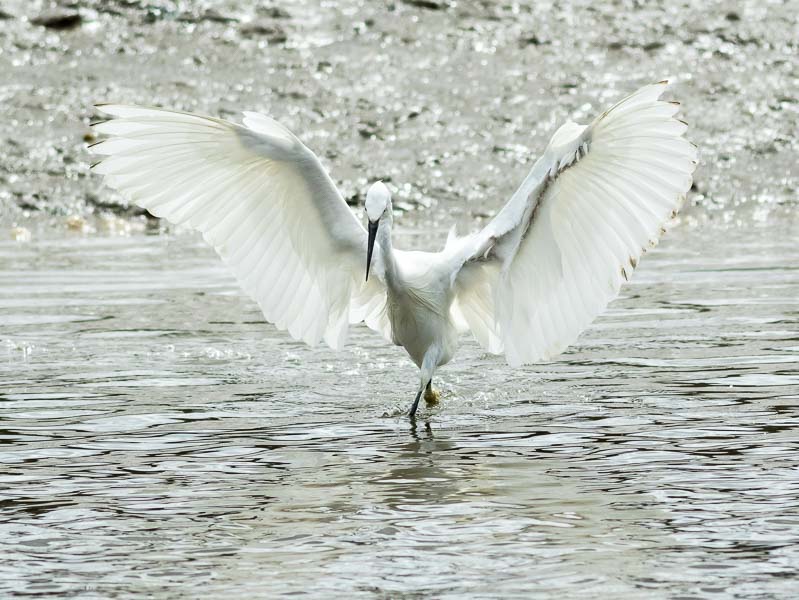 I heard the Little Egret’s1 alarm call before I saw it. It flew along the River Deben, against the ebbing tide. It landed at the end of a wide gully, with drenched, smooth mudflats steeped up at the sides. An Avocet2 had been walking away from the gully, along the receding shoreline, sweeping its upturned, black bill from side to side in shallow water searching for food, such as crustaceans and worms. It turned when it heard the Little Egret’s alarm, watched it land and strode rapidly towards it, determinedly. The Little Egret tucked its beak down in its chest, oblivious, neck arched round, and down, cleaning feathers on its chest. Short damp feathers on its crown were upright and spiky.

The Avocet clambered down the side of the gully, sticking its claws slowly, into the steeped mud, and jumped down into the edge of the water, about three metres away from the egret. It stood upright and still, and stared at the Little Egret. The egret stopped cleaning itself, raised its head, bill slightly ajar momentarily, as if disturbed in its cleaning routine, closed its bill, and stared back at the Avocet. It looked considerably taller than the delicate Avocet. Then it was over. The Avocet walked towards the river bank, further along the channel of water, and clambered up and out of the gully, on the other side, and followed the shoreline of the water. The Little Egret continued to stare at the Avocet, watching it walk away. The Avocet started to sweep its bill from side to side, back to usual feeding. The Little Egret became engrossed in cleaning feathers on its back. With neck down, stretched tightly around its body, to reach feathers on its back, bill and face hidden from view.

It is not unusual to see Little Egrets on British tidal rivers and mudflats. It is almost as if they have always been present, a familiar bird. They are a fairly new arrival and have bred in Britain for twenty four years. Fewer than 15 Little Egrets came to Britain between 1958-1988, commonly in springtime3. The first Little Egret recorded in Britain in 1826, was shot inYorkshire4. The situation changed after that, when they had a considerable expansion of their range5 with many birds recorded in the sheltered areas of estuaries on the south coast, including Poole Harbour and Chichester Harbour, arriving in the springtime6. Initially, they were recorded as vagrants as non-breeding birds. Hundreds of individuals gradually increased, to over 1,000 individuals in the autumn. Commonly winter flocks of Little Egret disperse south in springtime to breeding colonies in Europe. Trend showed that small groups of individuals stayed in Britain in the summertime. They bred successfully on Brownsea Island in 1996, one of Poole harbours largest islands. A pair raised three young and five pairs raised twelve the following year. Little Egrets live for about 5 years, and tend to breed from 2 years of age6. The outlook is currently good for Little Egrets on the River Deben. Little Egrets have increased by 47% over the 10 year period 2006/07 to 2016/20177. The population of Little Egrets occurring in the winter 2017/18 at sites, such as Blackwater Estuary, Breydon Water, and Blyth Water, where they are counted at low tide by the Wetland Bird Survey is thought to be in excess of 11,000 birds.

Harsh, cold winters can account for mortality in Little Egrets8. Winter gales, particularly when they are gusting at 123km/h can trap Little Egrets in trees. It was thought that Little Egrets might be susceptible to strong winter gales after 22 were found dead in the winter of 2013-2014, in Caernarfonshire, Wales. Several were tangled up in branches of pine trees and others lay nearby on the ground9. Little Egrets tend to disperse in severe cold weather to find alternative feeding areas. The brackish water of the River Deben occasionally freezes. In the winter of 2019-2020, ice flows formed at the edge of the river, and the incoming tide broke them up. Little Egrets leave areas of frozen water10. Foxes11, Minks12 and Weasels13 prey on Little Egret eggs and youngsters, at the nest, as do Crows.

Minks have been seen in the reed, fringed water channels near Melton train station. One swam along, flat on the water, with head slightly raised, leaving a curving water trail through the green algae, and disappeared into the reeds.

Probably not currently concerned about Minks, a Little Egret, known by local boat dwellers as ‘Eddie’, sex unknown, regularly hunts on a stretch of the river, during incoming tides and defends the area. It was concerned about Little Egrets encroaching and feeding in its area. Two little Egrets were on the bend in the river, catching fish along the edge of the water, some distance apart. One walked towards Eddie’s feeding area. Eddie was striding about in the centre of the river, catching fish. Occasionally taking a leap, wings out, fully extended, or arched up high, to leap forward, to the right, or to the left, or to turn and dash back, a real dancing queen, chasing fish, neck outstretched, then, a sudden lunge with the neck, and long, black bill into the water, to pull out a small fish. The egret stopped suddenly, motionless, near the shoreline, saw the advancing Little Egret, stretched its neck fully upright, and stared at the trespasser. The Little Egret puffed its body up and masses of wispy feathers jutted out from both sides of its body. It appeared to have a rounder shape, extended considerably by the fanned-out feathers extending from its body. One looked in a similar shape after it was drenched in the rain, recently. This was not a thoroughly wet Egret. It was angry and showing aggression to the intruder. It snarled, it’s bill now wide open, showing a vivid red tongue. The intruder, stopped in its tracks. It raised itself swiftly, from the water with much flapping of full wingspan, and dangling legs and scrabbling claws, chopping on the water as it turned, raised it legs, to align its body and flew back near to the other Little Egret. ‘Eddie’ deflated and strode off out into the middle of the river and got down to work looking for fish.

Feeding groups of Little Egrets only occur when there is a concentration of prey and this rarely occurs in the winter months14. Little Egrets are exclusive specialist feeders in shallow water, ranging in depth from 3-4 millimetres to 50 centimetres15. They frequently use a ‘foot-stirring’ action to disturb prey. When the prey dart away, the bird strikes with its long black bill16. Little Egrets are opportunistic feeders17. They have been observed eating Damselflies18 and Dragonflies19, 20,. The Little Egret chases after them, snatches them in mid air, or stalks up to a pair of dragonflies on the ground and strikes with its bill. Dragonflies are captured in the egret’s bill at the end of the insect’s abdomen and then the egret manoeuvres the insect into a suitable position to enable it to swallow it. Sometimes male dragonflies detach themselves and manage to escape during the manoeuvring21.

You may wonder how many do they eat? Estimations have suggested, if a Hobby ate only Common Darters they would need about 250 a day to survive22. Little Egrets are about twice the weight of a Hobby23 so they could consume about 500 Dragonflies a day, which they could achieve in an hour and a half24. Dragonflies could be a useful source of food if fish is in short supply. This may be something to look out for in the early summer months.

4 Naylor, K. A. 1996. A Reference Manual of Rare Birds in Great Britain and Ireland. Nottingham.