By Robin and Gillie Whittle

The proposed plan for the Medway rally, Thursday 14th to Friday 22nd July, was to sail to or launch on the River Crouch for a night at Burnham Marina, then onto Queenborough via Havengore Bridge.  After a visit to Chatham Dockyard the plan was to explore the River Medway up to Tonbridge. 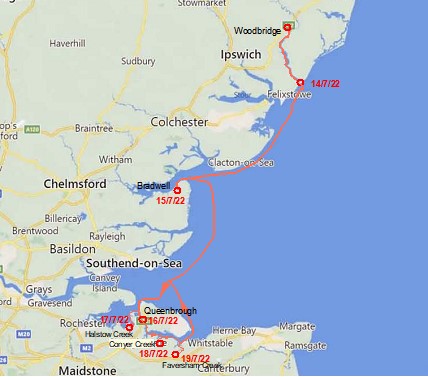 Route to the Swale

We had already enjoyed a rally in May, 2009 which had the same plan and we decided that we would explore the creeks around the Swale instead.  In order to make the journey from the River Deben to Queenborough more balanced we decided to spend the first night at Bradwell Marina.

On Thursday afternoon we sailed down from our mooring at Melton Boatyard to Felixstowe Ferry.  We noticed Robert Simper’s Grandson, Harry’s  Fishing trawler, Boy Michael, at the Rocks.  He had recently motored round from Brixham.  Our first night was spent on a swinging mooring at the Ferry.  David Andrew and Pat Spencer (1073 – Lady B) were moored close by and came over for a drink.  Their inflatable was driven by an electric motor!  They took us ashore for a meal at the Ferry Boat Inn, where we met up with the rally organiser, Bob and Wendy Whitehouse (423- Boudicca). 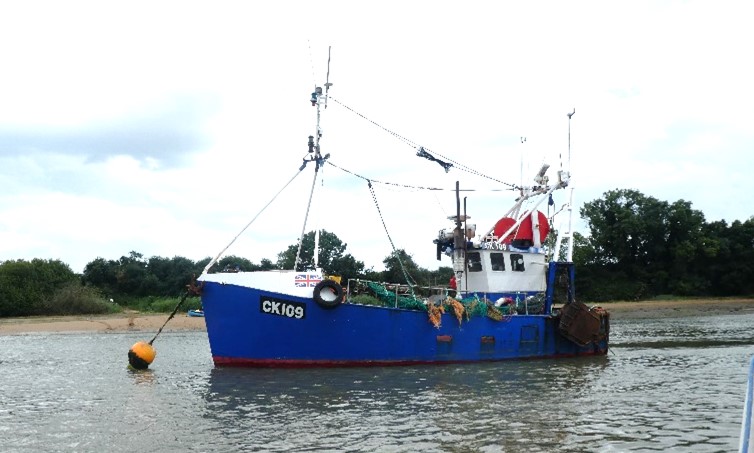 Friday, 15th July:  Hot. Wind NNE – SSE 2/3.  We left the Ferry at 7.15am, low water, with Lady B.  Boudicca had already left at 5.30am. David and Pat had decided to explore the Blackwater and the River Crouch and not come to the Medway.  Motoring over the Deben Bar at that time was nearly a disaster.  Both boats bounced several times off the shingle, luckily not coming to a halt.  The rest of the sail to Bradwell was uneventful in a hot, fickle wind.  We arrived at 1.15pm.  We strolled round to the Green Man for a drink and then back to the marina for a meal. 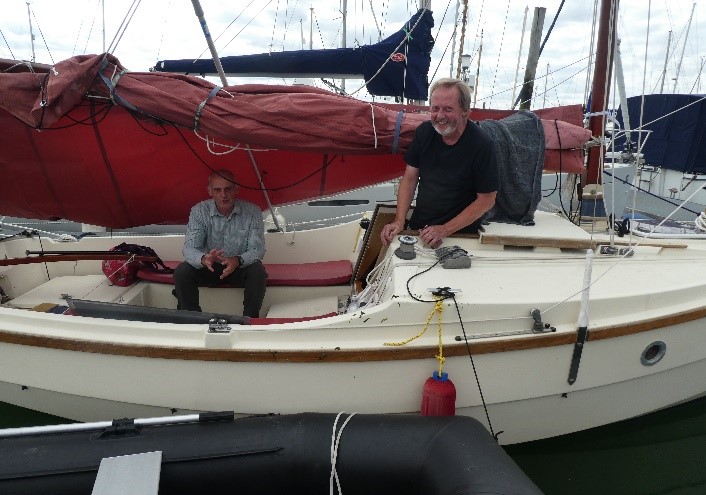 David and Pat aboard the ‘Lady B’

The sandbanks at low water dry out so it was essential that we found the correct buoys to ensure clear water.  Unfortunately, several of the buoys had been moved, removed or added since our charts were last used.  The Almanac was two years out of date, so we found ourselves hunting for one or two of the more important marks.  We were fortunate that the weather was sunny with light winds and found our way without going aground.  Buxey Sand appeared to stretch further north than we were expecting.  We found our way down the East Swin and then the West Swin into the Warp across to the Medway and so to Queenborough, arriving at 1.15pm.  We moored to a drying out berth, knowing that we would not be afloat until 2pm the following day.  After going ashore for some shopping, we returned to find the four other Shrimpers had arrived and had picked up drying-out moorings like ourselves. Bob in Boudicca, John Gardener and Judith Hedges (410 – Skylark), Paul Durbin and Debbie ? (96 – Thrift), and John and Paula Wilson (Shrimper 21, 88 – Sapphire). We all had a pleasant drink at the Yacht Club with a Chinese Take Away.

Sunday, 17th July: Hot (38°C) Wind SE-SW 1/3.  Bob set off early (5am) with the Wilsons to Chatham Docks.  The other two Shrimpers set off towards the Upper Medway just before us at 2pm.  We headed for Halstow Creek.  We were able to sail up to the top of the Creek. 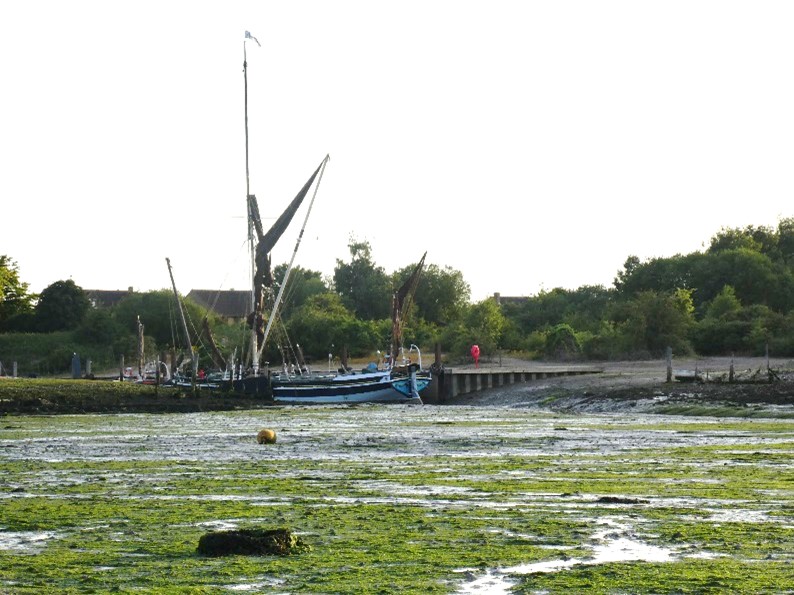 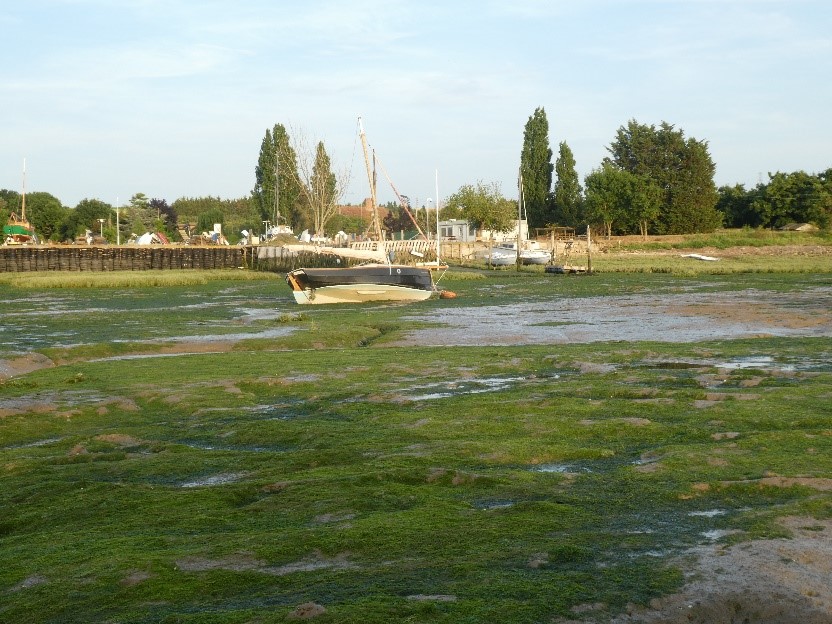 Another Shrimper dried out at Halstow Creek

A beautiful Thames Barge, Edith May, was just about to set sail on a two-hour Charter.  We moored up at the ‘scrubbing posts’ of the boatyard and walked to the nearby pub, The Three Tuns. We had to climb over two gates wound with barbed wire to get there. Only time for one drink before the tide started to fall.  The deputy manager of the boatyard allowed us to use his mooring.  The whole area dried out and we were fortunate to stay upright through the night. 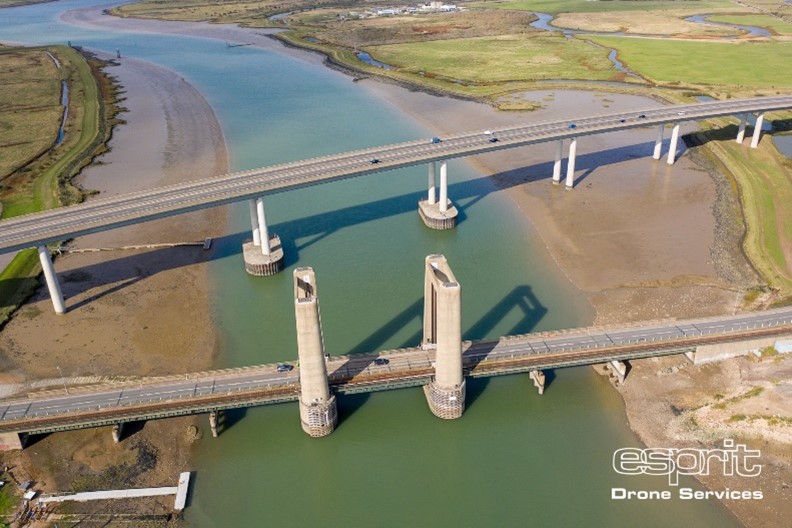 Monday, 18th July: Very Hot (42°C;  all time record in the UK) Wind S 2/3. We planned to sail to Conyer Creek where friends lived and we set off at 5.15am (high water) to Queenborough for temporary stay until the Kings Ferry Bridge was due to open. After shopping and sitting in a sheltered spot under trees in a little park, we set off at 11.15am to the bridge (due to open at 11.45am). 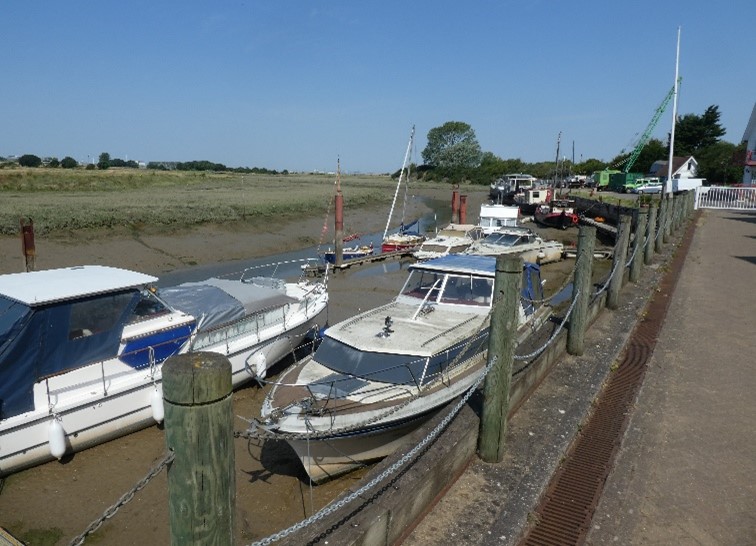 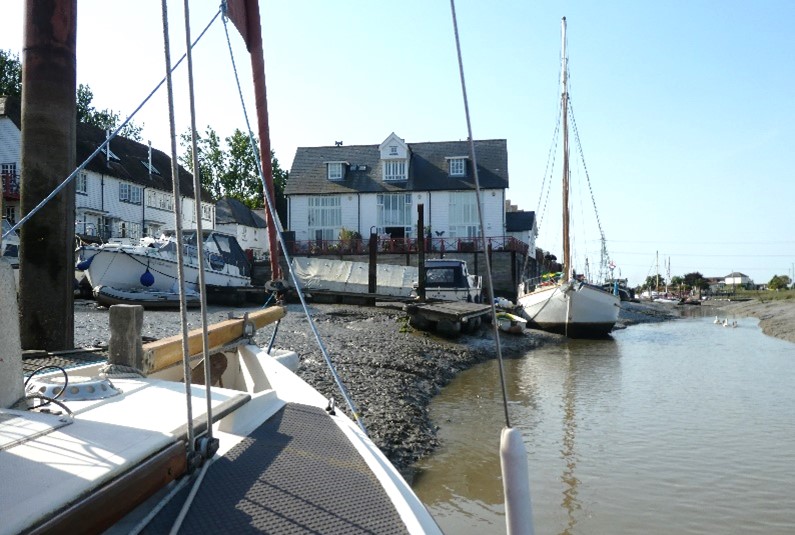 Our vhf calls were only answered as we neared the bridge (three miles from Queenborough).  We were informed that the bridge would not open as the temperature was too high.  This meant returning to Queenborough to take the mast down. Fortunately, we found a floating pontoon half way back and moored to that to sort out the mast (release the forestay and disconnect the boom).

We motored back to the bridge where four or five jet skis and fast motor boats were churning up the water making it very uncomfortable.  We let the mast down and passed under the low bridge successfully (there are two bridges – rail and road).  There was another pontoon just below the bridge which we moored to whilst we reraised the mast.  A man kindly came aboard to help (he had weak legs and a bad back but did stirling work!) and after getting the jib halyard unjammed under the cabin roof we managed to get the mast raised.

We had a pleasant sail down the Swale to the entrance to Conyer Creek and motored up to the pre-booked pontoon mooring at the edge of the river.  Gillie had a nasty fall as she stepped on to the pontoon (wearing reading spectacles caused her focus to be wrong).  Before mooring up I turned the boat round to face downstream.  This was a big mistake as we dried out without settling into the existing mud groove that was shaped for pointing upstream.    I raised the sail to give some shade – very hot).  Later went to the local pub, The Ship, for a drink.  By chance our friends, Bryn and Sue, turned up there just as we were about to leave. So, we celebrated our meeting with another drink!  We confirmed that we planned to leave the next day at 3.30pm and that they would join us for the sail round to Faversham (Faversham Creek) where they had booked a meal at the Posillipo Italian restaurant. 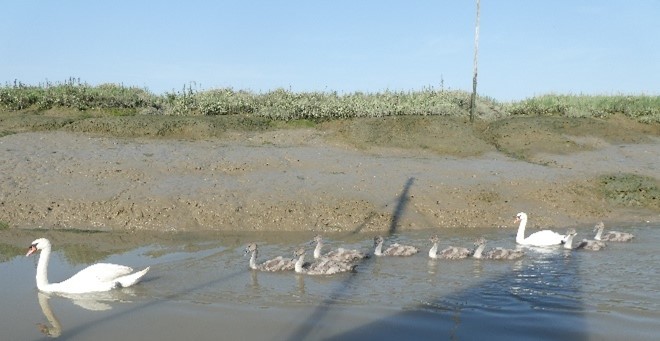 Family of Swans in Conyer Creek

On returning to the boat we found that the stern had settled too high and we were tipped over badly.  Worse, water which had collected in the bilges poured out over the floor boards on the port side.  Gillie had a very poor night until the water rose again at 2am.

Tuesday, 19th July:  Still very hot!  The first thing to do was to turn the boat round before it re-grounded.  The next high water was at 5.30pm so the earliest that we could leave was two hours before.  We spent the morning trying to keep cool.  We went for a short walk and found our friends’ house.  They welcomed us indoors for couple of hours and we admired the field that they had just acquired at the back of the garden.  On leaving them we revisited the pub for a lunchtime drink.  There was still two hours before the time to leave and it was too hot to sit in the boat, so we found a cool spot in the toilet block with two chairs to sit on – relative bliss!

Bryn and Sue arrived at 3.15pm so we were able to get off to an early start with just enough depth in the creek.  As soon as we had reached the Swale we hoisted the sail and had a pleasant sail eastward to the entrance to Faversham Creek.  It was a pleasant hot breeze on the nose, but we had plenty of time to get to Faversham before the tide started to ebb.  The creek contained channels up to Oare and Faversham.  Faversham Creek was the longer (about 2½M). We arrived at high water.  There were an amazing number of Thames Barges (sailing trim) moored to the banks. 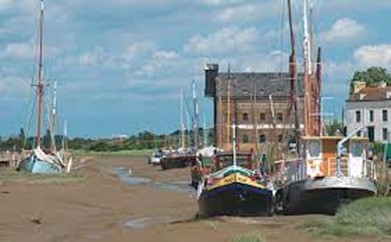 We found a pontoon to moor against which was close to the Italian restaurant.  Gillie and Sue went off to do some shopping and on their return we had a drink before setting off for the meal. 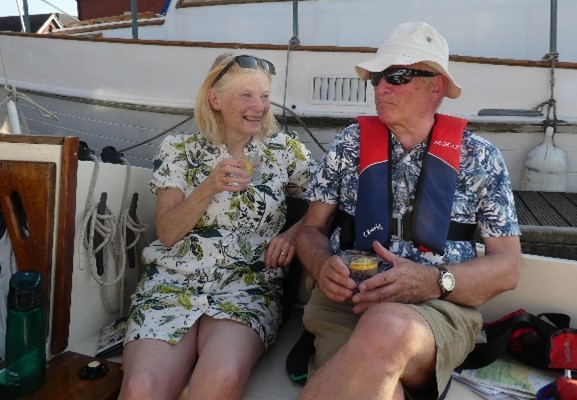 Drinks aboard with Bryn and Sue

At the restaurant we sat under a large patio umbrella, and during the evening a huge gust blew through causing one group to move sharply indoors. The meal was excellent served by local girls in Italian outfits.

When we got back to the boat it was high and dry, and we found the stern flag had been stolen – pretty poor behaviour by one of the locals!

Wednesday, 20th July:  We had decided to shorten our journey home by leaving Sheppey Island from the east through Whitstable Bay, instead of returning to Queenborough.  We set off in a sunny breeze from the south east (F3/5) at 6am (HW).  Once we had reached the Thames estuary we picked up the same waypoints as coming.  We arrived at Bradwell at 2pm sailing 40M and averaging 5Knots.   Soon after we arrived, the secretary of the Old Gaffers Association appeared on the pontoon and asked if we would be joining the racing at Stone.  Gillie introduced herself, as Colin had been in contact with her about our book, The Voyages of Bumble Chugger.  He came aboard for a chat and explained how we could sell the book through Amazon.  Later, I cooked supper on board.

Thursday, 21st July:  The last leg of the return journey to Woodbridge.  Again, we set off at high water, 6.30am.  It was sunny but not too hot with a NNW wind F2/3.  As we crossed the channel leading to Brightlingsea two yachts came up from behind and we were hailed by a friend, John Penn, from Waldringfield Sailing Club.  They continued further out to sea but also heading north east.

On reaching Walton-on-the-Naze the wind had dropped and we motor sailed to the entrance of the Deben.  We arrived at low water but being neaps there was plenty of water over the bar.  We had a pleasant sail up river and picked up a mooring at Waldringfield to have a late picnic lunch.  By the time we had got underway again there was sufficient water at Melton to be able to reach our pontoon.  We arrived at 4pm.

It had been the hottest sailing trip we have had in Bumble Chugger.

Robin Whittle is a civil engineer who worked on power stations and dams in his early working life.  In 1968 he joined Ove Arup and Partners and since then has provided specialist advice for reinforced, pre-stressed concrete and structural design from within Arup Research and Development. He retired in 2001, although continuing work as a Consultant.  His main pastime pursuits have centred around sailing and, in the latter years pottery, with his own studio.  He enjoyed many years sailing 505 dinghies and attended championships all over the world.  In 1970 he married Gillie, an architectural modelmaker, and she joined in on the sailing until, in the mid-nineties she declared that dinghy sailing was at an end for her!  Together they chose a more relaxed boat, the Cornish Shrimper, in which they could explore coastal waters.  The diaries Gillie kept over 25 years of Cornish Shrimper sailing became the basis of their book ‘The Voyages of Bumble Chugger: Trail and Sail around Western Europe’.  Robin is a member of the Felixstowe Ferry and Waldringfield Sailing Clubs.