Gillie and I retired from 505 dinghy sailing in 1995 and bought our Shrimper 19, ‘Bumble Chugger’ (124) in 1996.  The Shrimper is one of the most popular of small yachts built by Cornish Crabbers Ltd.  ‘Bumble Chugger’ has provided us with some wonderful adventures exploring the local estuaries and distant shores.  She has also enabled us to continue racing which has been of more interest to me, but Gillie has taken part with great skill, even if not with my enthusiasm! 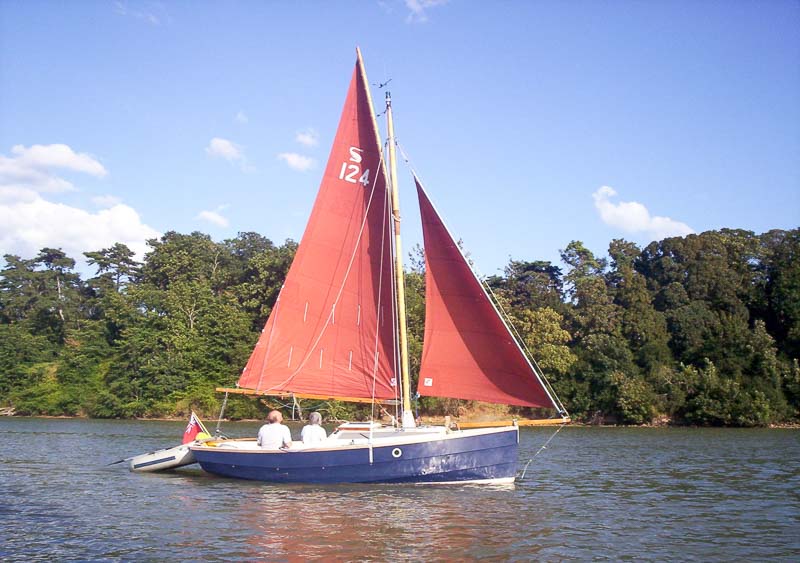 Our exploration of home waters has been centred around the River Deben.  One challenge has been to explore each of the East coast rivers as far we can get.  This has provided some memorable trips:  The Kent Stour to Canterbury; The Medway to Tonbridge; The Crouch to Battlebridge; the Chelmer nearly to Chelmsford (thick weed stopped us); the Colne to Colchester: the local rivers Stour, Orwell, Deben, Ore and Alde.  An extension to this was sailing round Norfolk to the Wash and then up to Cambridge, via the rivers Ooze and Cam, to visit my daughter. 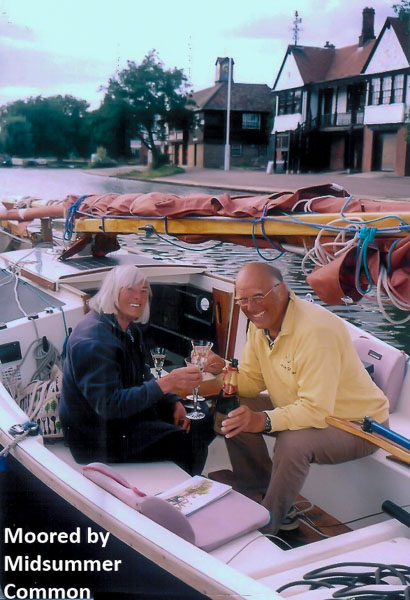 Our travels have been quite diverse, and we could be reasonably asked what has stimulated us to choose the particular voyages around Europe.  We lived in Surbiton until 2008, when we moved to Woodbridge and have relied on a good working trailer to reach the places where we wanted to sail.  We now keep the boat on a pontoon at Melton boatyard.

We both enjoy living aboard and are excited by the thought of new adventures.  Planning has been half the fun – working out where we want to go, how to get there, gathering the necessary charts and information and contacting friends who we might visit.  Sometimes we have had to acquire licences (e.g.  for using the canals or waterways such as in Ireland).   Of course, there have been occasions where we have set off on the spur of the moment.  Our trip to the Scilly Isles from Falmouth was one such – but it relied on a really stable period of weather.

One of our more fanciful ideas was to sail from ‘Surbiton to Surbiton’ via the south coast of England.  The first part of the journey was with the mast down until we got to Bristol via the Thames and Kennet and Avon canal.  Our trip escaped disaster as two of the locks had been damaged just before we got there, and we were lucky to get through.  There were many contrasts – motoring down the canal seeing the flash of kingfishers – to – struggling in a force 5 in the Bristol Channel trying to make port in a nasty chop as night approached.  Wonderful moments such as sighting a fellow Shrimper sailing towards us as we arrived at the mouth of the River Camel, after thirteen hours of broad reaching from Milford Haven.  Friends of ours had sailed out from Rock to meet us! Rounding Land’s End in warm sunshine within touching distance of the Armoured Knight; avoiding naval destroyers off Plymouth in thick fog; sailing up the River Rother to Rye to meet Gillie’s brother; battling against a strong wind all the way back up the Thames to Surbiton! 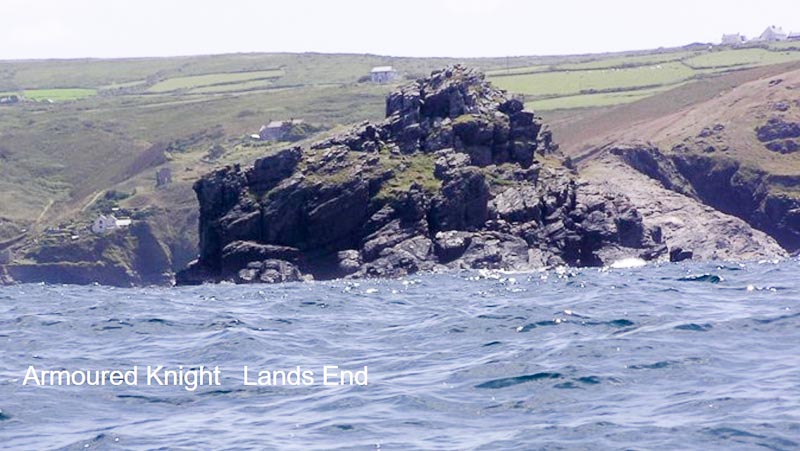 The idea of sailing down the Thames from Surbiton and round the coast to spend our summer holidays at Felixstowe Ferry prompted me to develop our hinged bowsprit to lower the mast at each of the twenty-three bridges.  A particularly exciting adventure was to join the London millennium Fireworks by boat, motoring down from Thames Ditton.  There was no active policing and we tied up to the wall beside the MI6 building by a crowded Vauxhall Bridge, 50m from one of the firework barges – Big Ben and the Houses of Parliament as backdrop!

Exploring the rivers Shannon and Erne in Ireland was a real thrill- wonderful sights and wonderful people.  Dreaming of new ventures has kept us at it – sailing round Mull, passing close by Fingal’s Cave, sailing across the Minch accompanied by diving dolphins and throngs of puffins have provided lasting memories.  Many of the trips turned out to be quite hairy but the one consistent aspect of all the trips has been the robustness of the Shrimper.  The boat has never let us down in any of the difficult conditions.  Sailing round the south of Mull of Kintyre in a 10knot current and hitting a strong breeze at the south west corner provided some scary moments. The rough seas in a Force 8 off the north coast of Britany were quite frightening knowing how rocky the coast is, and we were lucky to find the channel to the Treguier river.  Broad reaching in Force 9 from Cowes to the Hamble under jib was a wild experience!

One very memorable trip was to Portugal in 2009 (we ‘trailed’ to Cascais, just west of Lisbon).  Our Portuguese friends invited six Shrimpers for a ten-day exploration of the River Tegus. What wonderful hosts they turned out to be, including arranging visits to the Pena National Palace and a wonderful banquet in their house in Sintra.

Norway and Sweden were two separate trips, requiring three days towing to get there.  The boat acted as a very pleasant caravan with the advantage that we didn’t need to find a caravan site for the night.  Any layby would do!  Both trips opened our eyes to the wonders of these countries – the awesome snow-capped mountains towering over Norway’s Sognefjord which is over 130 miles long.  Sweden’s Göta canal. We visited Stockholm and explored the amazing archipelago down the east coast, avoiding all the rocks and finding exquisite, sheltered islands where we could drop anchor, bathe and picnic. 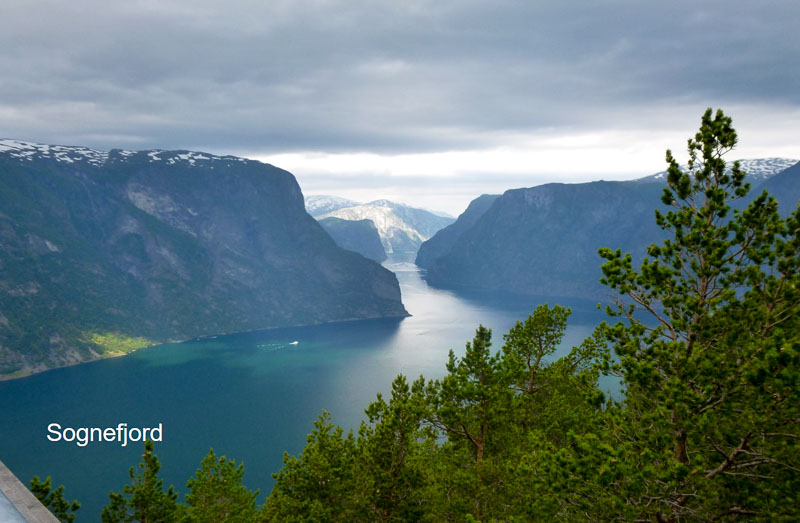 We have crossed the channel twice.  The first from Shoreham to Fécamp to visit my brother at Dives sur Mer.  The second as a result of a request from our granddaughter Hazel to sail to Calais from Ramsgate; there on the Saturday and back on the Sunday, through the traffic zone in the mist!

The idea of cruising down the River Lee and around London via Regent’s Canal, the Grand Union Canal and down the Thames turned out to be great fun visiting friends at different points and seeing London from quite a different point of view. 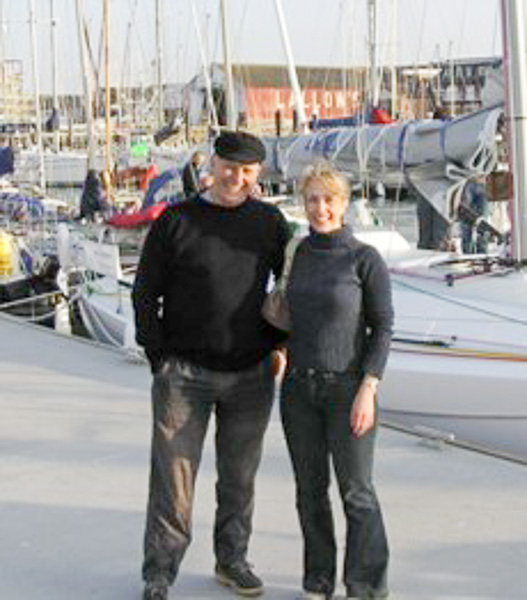 Our racing highlights have been gained mostly from the Deben and Aldeburgh Week regattas. There has been some intensive racing during some of the International Shrimper Weeks, which took us to sail in Denmark, France and Holland. However, I think the most memorable race that I have taken part in was the ‘Round the Island Race.  For me, this was a special challenge.  We entered six times, starting at 7am and sometimes finishing after 9pm.  The last time, in 2006, I sailed with my elder daughter, Jo.  We got to the Needles and the wind died. We found ourselves surrounded by hundreds of large yachts all trying to get round the corner waiting for the sea breeze to arrive.  We could see it arriving from the south west and turned to sail towards it, in the opposite direction to all the other yachts.  On reaching it we kept on the same tack turning round nearly 180º and soon arrived at St Catherine’s Point.  We hit another doldrum just off Bembridge and sailed in towards the shore to catch a light breeze.  On heading back towards the forts, we had a stroke of luck and picked up a fresh north westerly which took us to the finish line.  We had managed to win three Trophies (‘Discovery’, ‘Whale’ and ‘Smeaton’).

We continue to enjoy our trips in ‘Bumble Chugger’ as much as ever, especially visiting such places as the beautiful River Butley! 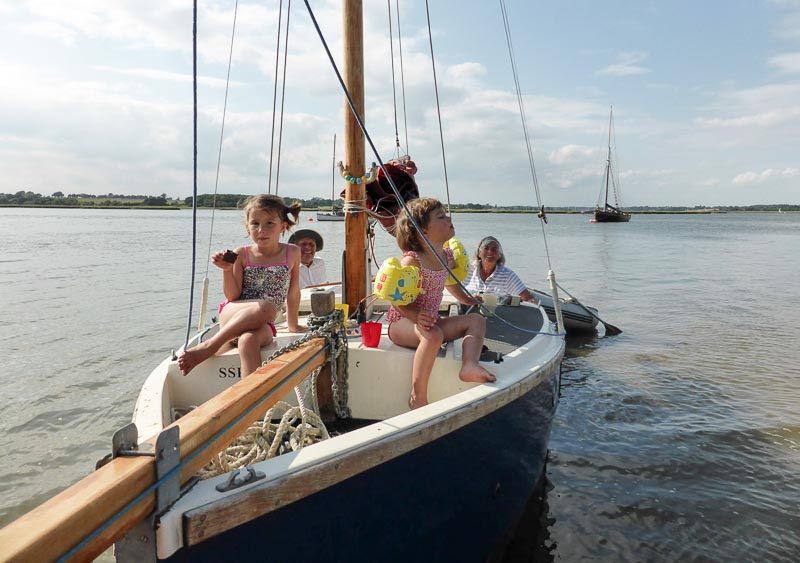