The Oystercatcher lifted itself up, its legs unfolding slowly, and stepped out of the central space of a coiled rope. An egg lay in the space, the rope provided a wall for the nest. The nest was on the top of a 50-60 foot, river maintenance vessel. The boat was used for clearing channels and ditches, effectively keeping the river flowing. It had a crane at one end, and a vast square hold in the centre. The Oystercatchers had their nest on a flat surface at the other end of the vessel. The Oystercatcher called four times, at the edge of the vessel. Its mate arrived, and landed on a rusty, round, steel stanchion. It walked over to the nest, stepped in and lowered itself down onto the egg. Adjusting itself by wobbling from side to side, to comfortably cover the speckled egg. Eggs are incubated for 24 to 35 days.1 The other Oystercatcher flew off to the blades of grass and green weed at the edge of the water, abundant because of the warm weather. Tide was high and coming in. That was day eight, for the egg in the rope.

Another pair of Oystercatchers had four new fledglings, on an old, decaying wooden boat, with a deep cavity. The chicks appeared to have no real feathers, just fluffy white and black mass, with short, speckled light, brown and white wings, and a faint outline of a white bib, characteristic of an adult. The legs appeared oversized in comparison to the size of the body with a bulging section at the knee, and long toes to enable them to spread their body weight against the flow of the tide. The adults and four fledglings left the nest site after seven days of first being observed.

Eurasian Oystercatchers (Haematopus ostralegus) are noisy birds with a distinctive black and white plumage, and strong, stout, bright orange bills.2 The female has a longer orange bill than the male.3  A very early study on Stokholm Island in Pembrokeshire referred to one of their calls as “piping”3 particularly by the male on look-out duty, away from the nest, when birds regarded as enemies were close by. A Pied Wagtail (Motacilla alba) on the maintenance vessel was ignored by both Oystercatchers, as were Swallows (Hirundo rustica) flying low and swirling round just above the Oystercatchers. They form long-term monogamous relationships although some do practice polygyny.4 Oystercatchers prise open or hammer bivalves including cockles, mussels and tellins Macoma and gastropods,5 such as, slugs and snails. They breed after three years of age, from April to July6 either in small groups or pairs.7 They raise two or three youngsters each year, and travel for up to two miles, to pick up worms for their chicks, if they nest away from wetland areas.8 Oystercatchers feed their young, unlike other waders that take their young to the food.9 That is why Oystercatchers are able to nest on flat warehouse roofs, adjacent to the Deben. The chicks are reliant on food from their parents for many months. They need time to learn the technique of opening mussels and cockles. Until this technique is perfected, they eat earthworms, lugworms and remnants in shells opened by their parents.

Oystercatchers are currently on the near threatened ‘red list’ of birds in decline, particularly over the last ten years, or so. In 2009 the species were in the ‘lease concern’ list of species.10 The overall population is decreasing.11 The British Bird Survey (BBS) of waders for 1995-201712 indicated that Oystercatchers have decreased by 38% over that period, particularly in Scotland. There are many threats to the Oystercatcher, as there are to all birds.  Many of which result in ecosystem degradation, mortality, disturbance, or reduced reproduction. For example, agriculture and aquaculture activities including both perennial and annual non-timber crops leads to ecosystem degradation, viewing Oystercatchers as a biological resource and involving wide scale hunting and trapping of the species results in mortality, human disturbance and intrusion of recreational activities results in disturbance to the species, and invasive species and problematic diseases from a particular species reduces reproductive success of the species. 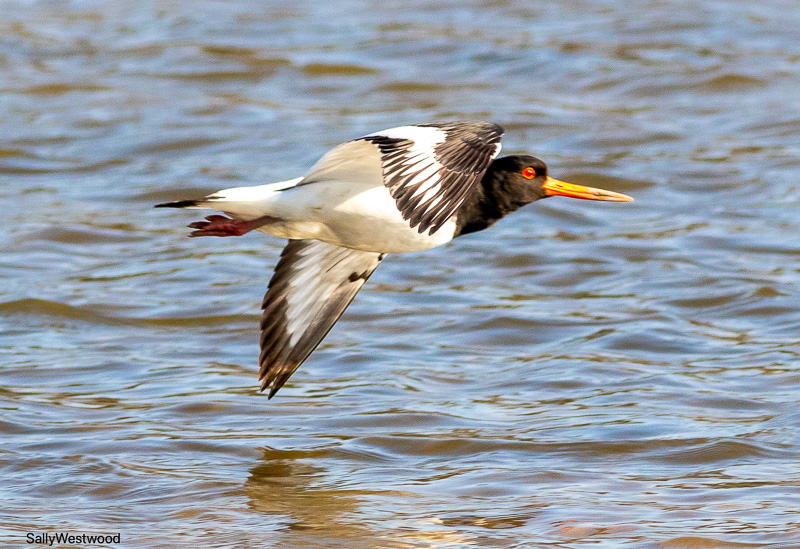 Oystercatchers on the Deben appear to be present most of the year, but many Oystercatchers do migrate. Individual migratory behaviour is associated with hatching date and time for growth of the chick.13 Chicks that have hatched late may not acquire sufficient fat to join other migrants in the post fledgling period. They might migrate later or stay near their breeding grounds. If migration takes place in whole family groups, adults wait for their juveniles to be ready to travel.14  Oystercatchers are chiefly on coastal areas, including estuarine mudflats, rocky shores and salt marshes, when not in the breeding season.15 The nest is frequently a simple shallow scrape on raised levels, such as earth banks, or cliff tops, in short vegetation, cultivated or non cultivated land or in areas of taller vegetation, such as moorland and woods. Boats moored on the river, provide a raised level for the Oystercatchers, away from ground predators.16

Oystercatchers in Argyle, western Scotland have been found to be subject to parasitism by Black-headed Gulls, who have laid eggs in Oystercatcher’s nests.17 Oystercatcher nests have also played host to eggs placed by Herring Gulls and Common Gulls. However, the eggs are not the same size as the Oystercatcher’s eggs, but it is reported that they do resemble the Oystercatcher’s eggs, with some speckles. Unlike those of the Cuckoo (Cuculus Canopus), who lay eggs of a similar colour, but not a similar size to those of the chosen host species,18 a rather more sophisticated adaption of parasitism when compared to other birds’ crude endeavours. Two males and a female Cuckoo have been seen and heard along both the Woodbridge and the Sutton Hoo sides of the river during 2021.

On day 11 for the camouflaged egg in the Oystercatcher’s rope nest, an adult Oystercatcher walked round the coiled ropes on the vessel, near the nest. It called twice in succession, ‘keep, keep’ and its mate landed near the ropes. The first Oystercatcher, squawked loudly and flew off. The remaining Oystercatcher, walked to the nest and poked the rope. It walked to the edge of the vessel and called three times. Its mate arrived, about three minutes after its departure. The other Oystercatcher flew off, also squawking, as it took off. Oystercatchers share incubation, but perhaps not for equal proportions of time. That activity of one Oystercatcher flying away and being called back with long whistles by the other, and then swapping nest duty continued for over two hours. Small bursts of time away from the nest for a fly round or a feed. It was cooler weather. Much whistling and squawking, but no alarm. The pair mated and the male flew off, down river. Mating occurred several times over the following few days. The egg might have been infertile, since infertile eggs are not unusual for Oystercatchers.19 Last summer, two Oystercatchers, perhaps the same pair on the same vessel raised and fed a chick for 3 or 4 days, after which the chick disappeared. It was thought to have been predated by a Crow (Corvus c. Cornix). However, Oystercatchers are agile and swift flyers and enemies are followed and attacked until they are driven away. They have been seen dislodging a tail feather from a Raven (Corvus c. Corax).20  It is possible the chick may have fell off the side of the vessel into the mud at low tide or into the water. Hopefully the Oystercatchers will be successful with fledglings this year.