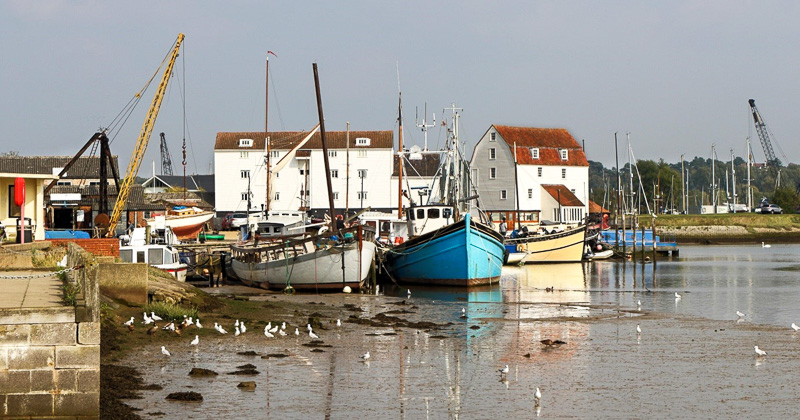 I have always particularly enjoyed the placards of detailed boat information that have been on display at Maritime Woodbridge but it was working with the Waldringfield History Group on their book Waldringfield: a Suffolk Village by the River Deben (2020) that made me more acutely aware how much history of many different types, is encapsulated in our river, particularly in its businesses, its boats, its people and their skills and interests.

Sometimes, the evidence around us has become so familiar that we hardly see it. An article this month in Topmasts: the Journal for the Society for Nautical Research snr.org.uk/topmast/ (p10) opened my eyes to the history of Lady Alice Kenlis, a Deben wreck about which I was previously completely ignorant.

I’m therefore particularly pleased to introduce this article from Brian Corbett who is leading the UK Heritage Harbour initiative and makes no secret of his belief that the River Deben should be part of this. The RDA Journal, however, prints this article for information and interest – not to lobby!

I have also taken the opportunity of adding a few photos of the River Deben’s older inhabitants to Brian’s interesting contribution. 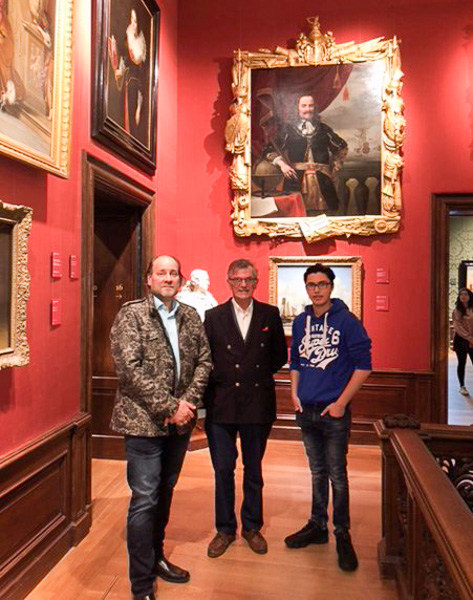 When did it all start?  Actually 1667, when Admiral de Ruyter led the Dutch Navy fleet to the River Medway and set fire to a substantial part of the British Royal Navy, capturing the British flagship, the Royal Charles. This embarrassment enabled Samuel Pepys to convince the King to invest heavily in the navy, leading to the greatest world navy of the time for Britain.  350 years later, in June 2017, a Dutch fleet of 200 yachts, tall ships, ex naval and fishing heritage vessels visited the Medway, in two fleets, to celebrate the anniversary. It was a great event, with the Dutch making sterling use of this magnificent river. As the UK event coordinator, I spent much time in The Netherlands, before and since, discovering that one reason the Dutch have a greater appreciation of their status as a maritime nation, arises from the establishment of Heritage Harbour status in Amsterdam, Rotterdam and many ports and fishing harbours. 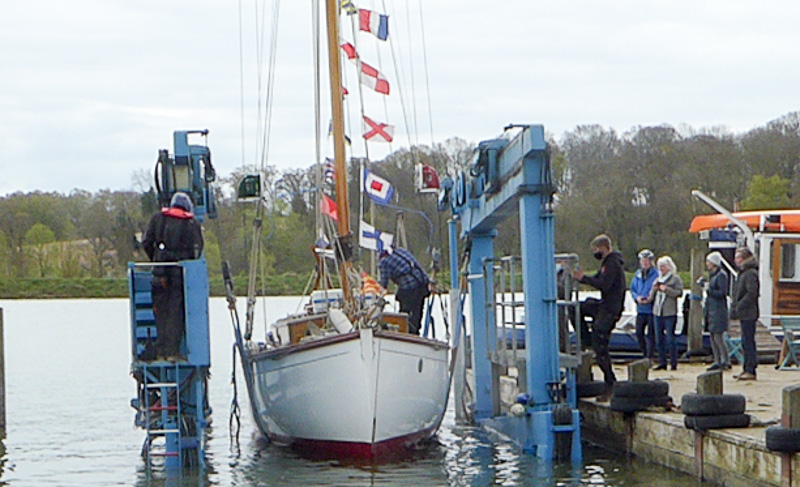 Arthur Ransome’s ‘good little ship’ Nancy Blackett regularly spends her winters on the Deben. Here she is being launched from Robertson’s Boatyard 29.4.2021 on her 90th birthday

So, a joint initiative by the Maritime Heritage Trust (MHT) and National Historic Ships (NHS) Shipshape Network; with strong support from the European Maritime Heritage (EMH), proposed that historic Ports and harbours in England, Scotland, Wales and Northern Ireland become officially recognised as ‘Heritage Harbours’. The developing Heritage Harbours recognise the great value in sensitively developing their, often superb, historic buildings; waste land; mooring; and maintenance facilities for both local and visiting historic vessels and are identified within the NHS Shipshape Network regions.

The nomination of Medway (HH1), as the first British heritage harbour. was presented to a meeting, at Sun Pier House, Chatham, on 10 December 2018, which was well attended by some forty enthusiastic representatives from

Faversham & Oare Creeks Heritage Harbour Group (HH2)  has met regularly since early 2019 at Faversham Guildhall. Considerable work in optimising balanced development and improvement of the creeks has already been carried out by group members.  An exciting feature is that Kent County Council has continued the design work for the replacement of the Faversham upper creek bridge. A member of the group, the Faversham Creek Navigation Company, CIC., as well as carrying out important dredging work, are rebuilding the Town Council Brents Mooring Jetty. 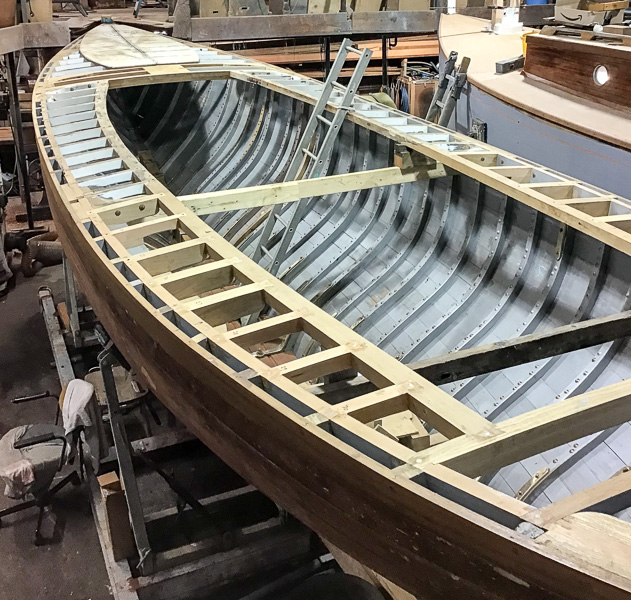 The nomination of Exeter Ship Canal & City Basin Heritage Harbour (HH4) followed at the end of 2020. The ship canal, the oldest in the country, was built so vessels can navigate the Exe Estuary to the heart of Exeter from which developed boat building and maritime traditions throughout the Port with its estuary and city quays that are still active today. 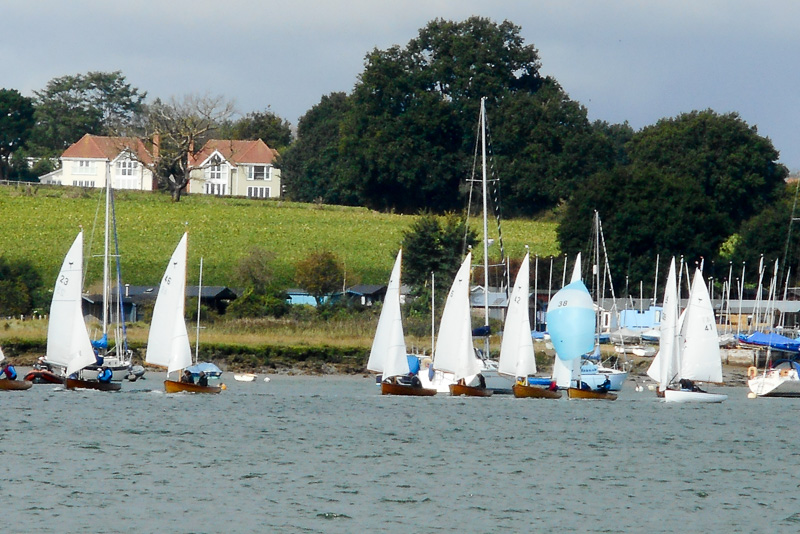 The Waldringfield dragonflies were designed specially for the WSC in 1949. Here they welcome their sisters from Ireland,  the IDRA 14s,  who celebrated their 75th anniversary this year

The Sandwich Port and Haven Commissioners; other Sandwich maritime and heritage organisation; at the beautiful medieval town and port, and;  Dover District Council, held the inaugural meeting and have established the ancient Cinque Port as Sandwich Heritage Harbour (HH5).

An enthusiastic and successful inaugural meeting was held, recently to take forward Brightlingsea as Heritage Harbour (HH6). It was proposed that the important riverside villages and Colchester port should be associated, as part of ‘Brightlingsea & Colne Heritage Harbour’. Not generally known is the fact that Brightlingsea is a ‘Link port’ to the Cinque Port of Sandwich.

Chester (HP7) has been nominated as the first of the Rivers and Canals system Heritage Ports. This has been followed by Shardlow (HP9), the lovely ‘hidden gem’ canal side village and port at the Derbyshire junction of the River Trent and the Trent and Mersey Canal. It is hoped that Stourport and Brentford will follow.

Considerable mutual benefit and local pride can be achieved from the ‘Heritage Harbour’ status, by pulling together, in a forum group, all the interested parties; local government authorities; the statutory port authority; developers; harbour-side commercial interests; historic trusts; the boating community; etc. etc. The status provides the major link between land and floating maritime heritage, and; opportunities for trusts and charities, encouraging young people, to engage in confidence building activities; associated funding streams, and; the cooperation from a growing national community of Heritage Harbours and Ports. In many cases the maritime heritage of a region relates to the river that forms a highway through the centuries linking its towns and villages. 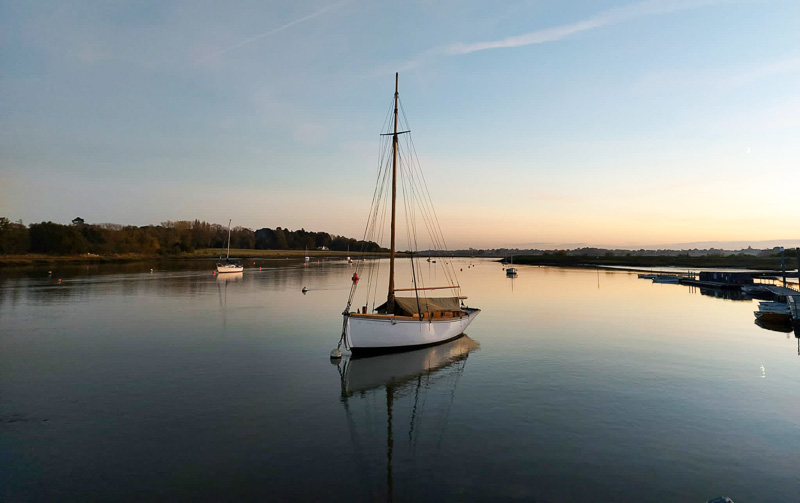 Clytie, built at Eversons (now The Woodbridge Boatyard) will celebrate her 100 birthday next year

The beautiful Suffolk River Deben is just such an ancient highway, deserving of Heritage Harbour status for its navigation, bringing together Melton, Woodbridge, Martlesham Creek, Waldringfield, Kirton Creek, Ramsholt, The Fleet, King’s Fleet, Felixstowe Ferry and Bawdsey. The river is, and always has been, home to a considerable number of highly skilled traditional boat builders and, consequently, is an ideal haven for classic yachts and other heritage vessels, many of which were designed and built specifically for local conditions. The construction and rebuilding of hundreds of beautiful classic yachts in Deben boatyards, many of which are sailing throughout the world, share Suffolk’s maritime heritage with initiatives such as the Sutton Hoo ship project and potential ‘Protection of Wrecks’ status for the ‘Lady Alice Kenlis’.

I’ve been racing my 1892 designed Herreshoff Half-Rater, ‘Winifred’ at classic yacht regattas from Falmouth to Oban for ten years. Photo at Cowes Classics. 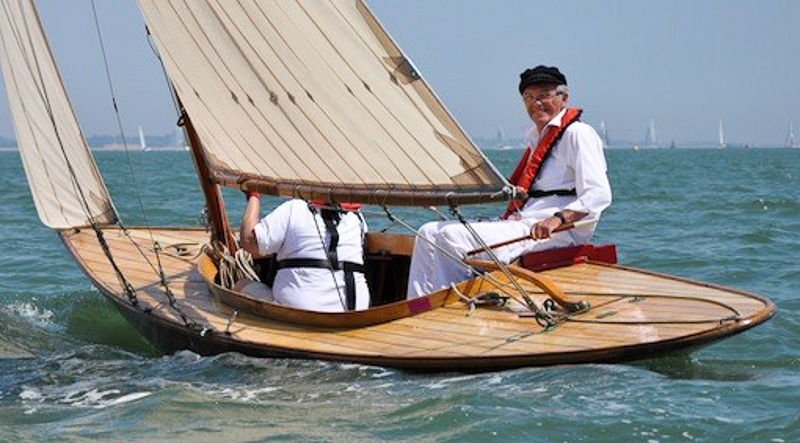