Tidal River Deben was never a major fishing centre. The saltings along the edge of the river were, and still are, breeding grounds for some fish, but the estuary really relied on fish coming from the North Sea. However, the narrow river entrance and fast tide often swept them past. In the past there was enough fish to warrant some commercial fishing in the Deben. 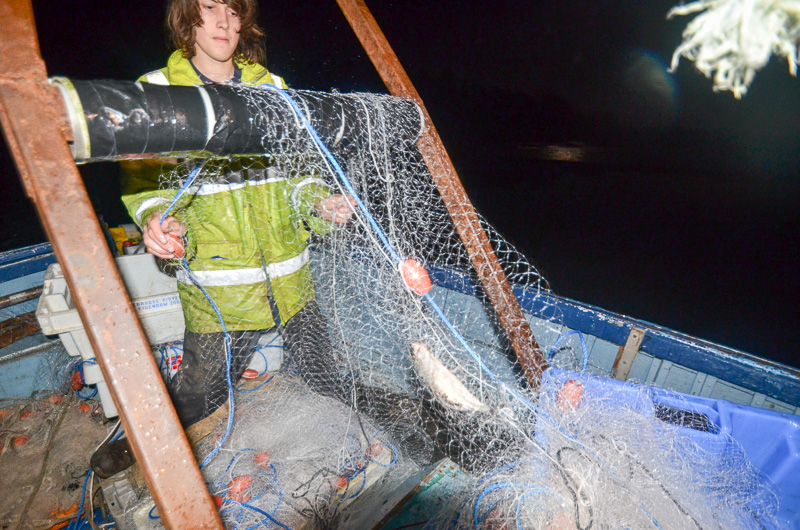 Harry Simper drift netting for herring in the Our Boys

In the medieval period there appears to have been a fish trap on the ooze mud upriver of Stonner Point. Also, there were the remains of posts on the Rocks beach, now all gone, which might have been another trap. In the 1660s it was recorded that the Ramsholt Reach was where the Woodbridge fishermen came to catch cod. Woodbridge was the centre of limited fishing up to end of nineteenth century when Felixstowe Ferry and Bawdsey sea beach took over because fish and whelks were caught at sea and sent by rail to Billingsgate Market.

The Woodbridge fishermen don’t seem to have been interested in herring fishing, although these fish must have come into river. The Woodbridge fishermen used the ancient Peter nets for bottom feeding flat fish, but certainly by the nineteenth century they were trawling for skate, sole and dab. In the Victorian period there were two small smacks working from Woodbridge and their catch was sold in the town. The men also worked as pilots bringing the barges up and fished between jobs. The pilot Peter Broom owned the Jem Mace, named after the famous prize fighter, which carried a beam trawl. This smack seems seem to have been the last to carry the Woodbridge fishing registration letters WE which stopped being issued in 1882.

Shellfish do thrive in the river in limited numbers and there have been repeated attempts to turn this into a commercial fishery. The earliest we know much about was Thomas Abbott’s eighteenth-century venture in Shottisham Creek. This seems to have been an old oyster fishery and might even have been the reason why the lonely cottage I live in was built around 1600. Abbott must have been doing well at end of the eightieth century because he was building small smacks in Ramsholt. The last of these was the 25ft Dion in 1800. Shortly after this Abbott died leaving his unfortunate wife with business that had collapsed and the smacks were sold and the oyster hut at the creek mouth abandoned. The next recorded oyster venture was in the 1880s when Charles Borras, described as a London businessman, got the licence for the Ramsholt Reach and had oyster storage pits on Green Point. He appears to have been one of a group of men that had bought the Ramsholt Estate and were attempting to find a commercial venture to replace agriculture which was at rock bottom. Borras employed West Mersea oystermen to bring their smacks around and work the grounds below Ramsholt Dock Quay. Borras sold out to the Government, who were trying to develop oyster fishing in deprived areas, but they brought in American oysters which were full of a boring worm. 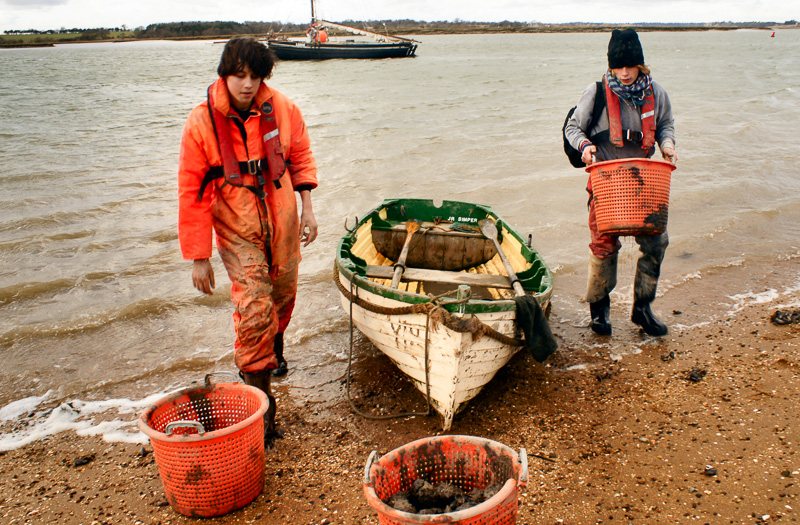 After the Ramsholt oyster fishery was abandoned three West Mersea smacks (probably the men who had worked for Borris) use to come every summer and dredge the Ramsholt free oysters until there were few left. They also went trawling for eels above Woodbridge Tide Mill. The Woodbridge men had 14ft eel boats with wet wells and took part in this fishery. In the 1920s Stannard lived aboard the smack Welcome at Ramsholt and picked up a modest living trawling over the eel grass in the lower river. However, that decade the eel grass all along the East Coast suddenly vanished and has not returned in any scale. An Alderton man had made a living picking up winkles on the Ramsholt foreshore and another man, known as the ‘Great British winkler’, did the same and had a boat at Stonner Point. The winkles declined and then largely vanished, possibly because of the rapid foreshore erosion. In the Depression of the 1930s three enterprising men at Waldringfield started a mussel fishery and in the winter had riddle on the beach. In the 1960s Ray Lord restarted the mussel fishery in the Stonner Channel, but later moved them up near Methersgate Quay because he believed there was more food there.

Only a very few native oysters were left in Deben when in the 1980s the Waldringfield Harbour Master Alan Davidson rented Hemley Creek and started to produce Pacific oysters. In 1988 Alan was joined by Geoff Pearce and myself to form the Ramsholt Oysters partnership. This did not produce enough oyster to justify the hard work Alan and Geoff had put in, but it did reintroduce oysters to the Deben. In 2011 my grandson Harry Simper was about to leave school and decided he was going to ‘work on the river’. He went up the river at dead low tide and located all the places were shellfish were thriving. We rented Hemley Creek and began the Deben Oyster project. Marketing was really hard work and my son Jonathan, with the chef Steve David, started the Woodbridge Shuck Festival to promote local food. The project was beginning to get going when Harry announced he didn’t find oysters enough of a challenge, so he switched to sea trawling from Aldeburgh, Southwold, Rye and now Brixham. Our boats Buster Boy and Diana May remain based at Ramsholt but are moved around looking for fish. 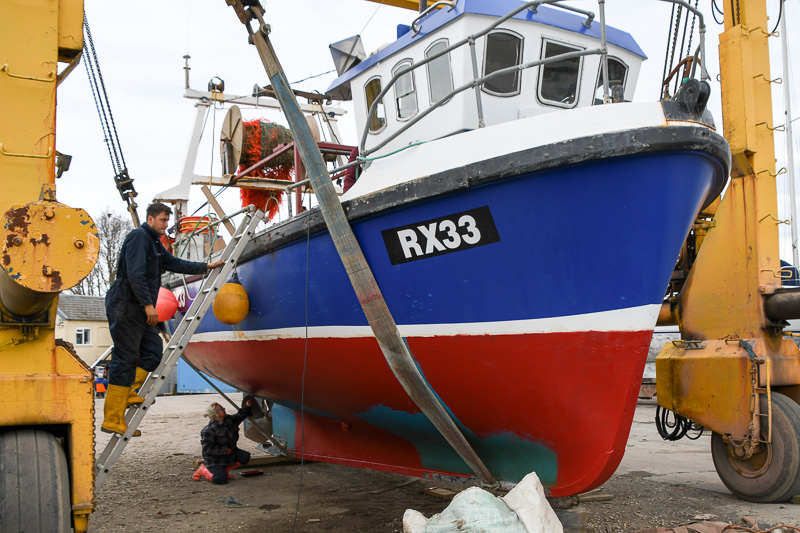 Just after World War II there was still a food shortage and many pleasure motor boats at Ramsholt and Felixstowe Ferry carried a trawl. I remember seeing five Ramsholt boats all trawling one Sunday morning in about 1950. All these would have caught enough fish for several meals. Certainly in 1956 it was still possible to land a bucket full of sole from an evening trawling just below Waldringfield. Pleasure trawling dropped out of favour as catches got smaller, but the Felixstowe Ferry fishing boats would still regularly trawl in the river if they couldn’t go to sea for several days, but the poor returns saw this practice decline.

Before about 1985 there was commercial shrimp fishing in the summer above Methersgate Quay. It appears that grey mullet always came into the Deben in the summer. This fish was not liked by English people although some people speared them when they came to feed around the boats. It appears West Indians moving into Britain found the taste of mullet similar to a fish they had had at home. This created a market in London and by the 1980s there was commercial netting for mullet in the summer in the upper shallow Deben reaches. Again, after about two decades the mullet declined. Possibly because the water was slightly warmer, more bass moved in, and Felixstowe Ferry fishermen began to work them. To do this meant putting a surface net across the river and fishermen usually did this in the early morning because of the yacht traffic. Even this fishery has declined and in the summer of 2021, I have not seen any boats commercially fishing in the Deben. 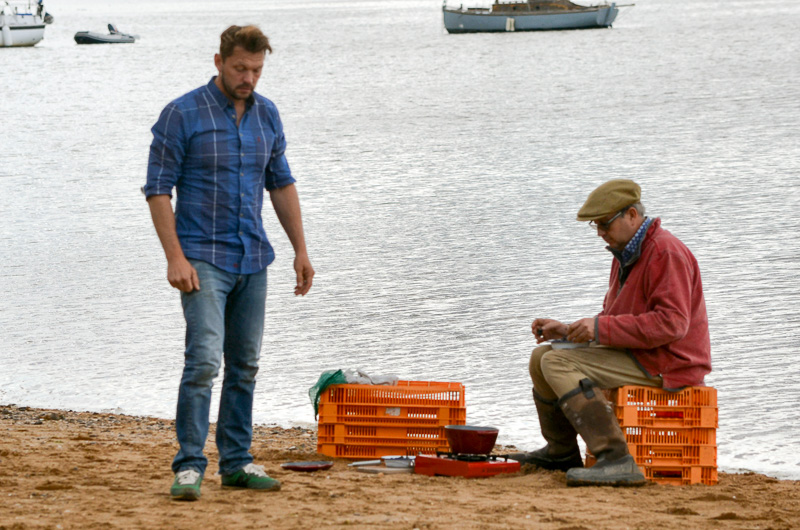 While commercial fishing has declined the seal population has risen so there must still be fish in the river. From memory the occasional seal was always seen in the Deben, but there was no large population on this part of the coast. In the early 1960s no one used the public footpath on the river wall and a seal came to Shottisham Creek and had her pups. After this the seals moved to the quieter Hemley Creek.

On the North Norfolk coast regular seal shoots kept the number down, but once this stopped the population steadily increased along the coast. By the 1980s a colony of seals had established themselves in the Walton Backwaters. Red mud stuck to some seals must show there is regular movement between the Walton Backwater seals and other local rivers. Some of the coastal fishermen claim they have given up commercial fishing because so many fish are taken by seals from their nets. Seals are regularly seen working along the surface nets and fish in trawls are often bitten.

The other wildlife fish eater is the otter. In 1960 I found the last otter on Shottisham Creek laying dead, probably shot by a gamekeeper. After this there were reports of an otter seen in Kirton Creek then for decades no otters on the tidal Deben. It appears that otters were reintroduced into the freshwater Deben and steadily moved down. In about 2002 I was regularly seeing otters and hearing reports of them moving about the river. Even now with a healthy, but largely unseen, population of otters in the Deben it is doubtful if they make a serious impact on the fish stocks. 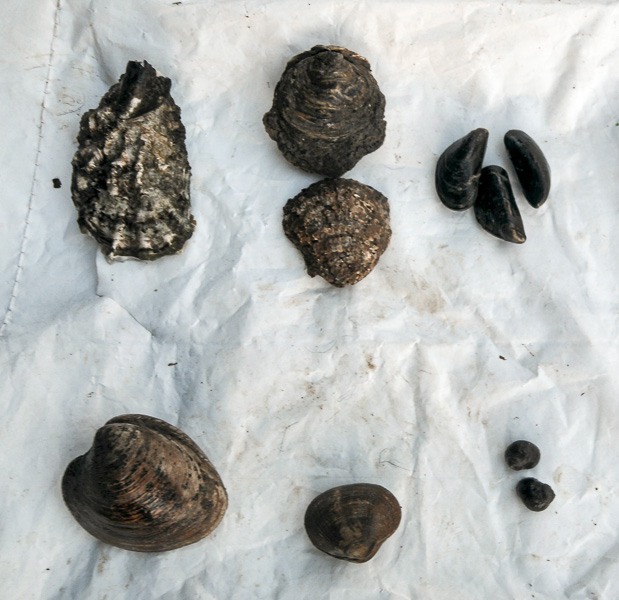 Shellfish in the River Deben. Oysters, mussels, cockles, and winkles

NB Part of this article is scheduled to appear in The Deben Magazine issue 63. 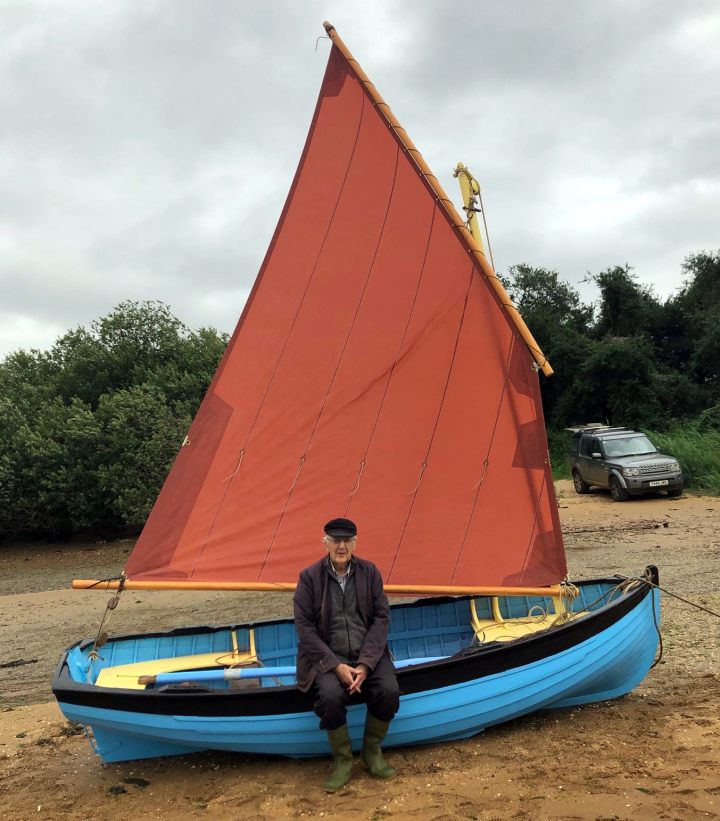 Robert Simper has lived on the Deben all his life. When he left school in 1953, he started work on the family farms where horses were still working alongside tractors. He also took opportunities to crew on some of the last barges still trading under sail. He describes himself as an ‘accidental writer’ but has become a prolific author and notable local historian. His most recent book is The Lost Village of Ramsholt (Creekside Publishing 2020). Robert Simper was a founding member of the RDA and is currently its President.