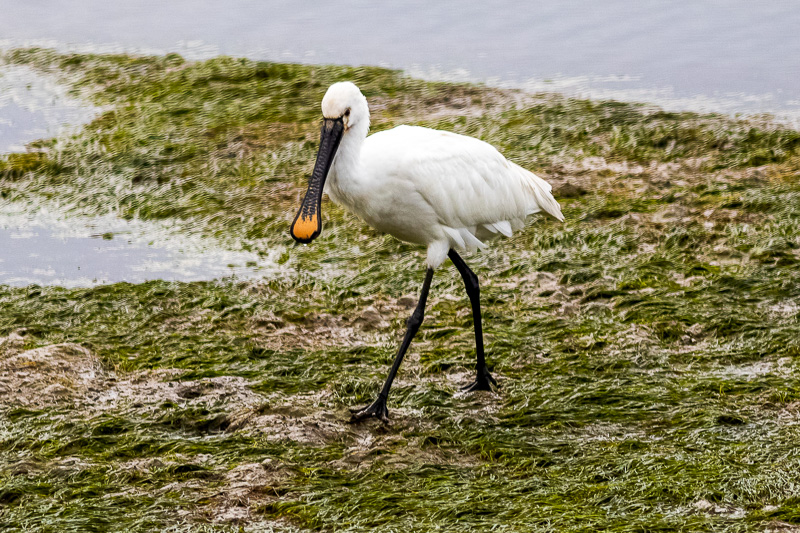 An Eurasian Spoonbill1 was observed feeding at Lodge Marsh, Ramsholt, on the Northern shoreline of the River Deben, in early June this year, and another in July.2 Last summer six birds were seen together in June at the same marshland. I was not fortunate enough to capture an image of the Spoonbill at Ramsholt. The spoonbill in the image above (Figure 1) was taken during one of my brief winter migrations to Portugal. The area of extensive marshland at Ramsholt, bordering the river, is an ideal feeding habitat for Spoonbills.3 They feed in coastal waters, as well as freshwater and wetland4 areas. These sightings were special occasions for River Deben birdwatchers. Spoonbills are one of the rarest birds in the country. Spoonbills are newcomers to East Anglia, and England generally, following an absence of over 300 years.5

Spoonbills are mostly migratory and winter in south-western Iberia,6 although according to the RSPB approximately 81 birds winter here.7 The chances of seeing a Spoonbill on the shores of the River Deben may have been affected by mortality during long spring migrations8 prior to their gradual return to Britain in the 1990s. Spoonbills that breed in the Netherlands frequently winter in Mauritania, France and Iberia, and they have high survival rates in the summer, autumn and winter migrations, regardless of the distance of the migration. Whereas, those that complete a long migration from Mauritania to France (1000kms) during spring migration suffer mortality of five percent. This percentage out of 65 birds is approximately 3 birds, admittedly not that high but it does indicate the cost of migration for Spoonbills.

The core area of the Spoonbill breeding range is currently within the East Anglian fens and the Norfolk Broads, with breeding recorded in Holkham in Norfolk, Lincolnshire in the north and Wales to the west.9 However, the persecution of the species in Britain led to the extinction of Spoonbills in the 1600s. Spoonbills last managed to raise chicks in Suffolk in 1668.10 They were last observed in 1688, in Trimley, Suffolk. Spoonbills were hunted for their plumes, private collections and food.11 Further afield, in Europe, disturbance, pollution, and the draining of reedbeds exasperated their plight. Conservation and changing attitudes led to an increase in numbers in the nineteenth century across Europe. They began to cross the channel from France and Spain in 1999. Several non-breeding Spoonbills were recorded as visitors to the southeast of England. Approximately 156 birds have been recorded each year12 since that date and regular sightings of summering birds have been recorded in East Anglia.13 According to the RSPB there are currently about 4 breeding birds in the UK.14

It is not surprising that Spoonbills have been seen near the Deben at Ramsholt. Spoonbills successfully nested and reared young in 202015 on the RSPB’s nature reserve on Havergate Island, in the River Ore, Suffolk. A short distance along the coast from the Deben. It is well-known for its Spoonbills, Avocets and Terns,16 with a mix of suitable habitats for Spoonbills, including shingle, saline lagoons, and saltmarsh. The RSPB spent fifteen years trying out various techniques to try to encourage Spoonbills to nest on the island, one of which worked. Models of Spoonbills were placed on ready made nests on raised platforms. A construction that is similar to the species’ natural nest sites. Breeding birds from Holkham Nature Reserve have been seen at Havergate island,17 demonstrating the gradual movements of Spoonbills coming into our region.

Spoonbills are a distinctive looking waders as a consequence of their unusual, extremely flattened long black bills that are ‘wider in the distal parts’18 which resembles a spoon-shape. They have some yellow on both the tip of their bill and their breast, and they have long black legs.19 They are roughly about the same size as a Grey Heron, but slightly smaller. To give an idea of the size of a Spoonbill, the image below, (Figure 2) shows the difference in size between a Spoonbill and a Little Egret. Spoonbills have a wingspan of 120-135cm, a length of 80-90cn and weigh between 1.3kg to 2kg. 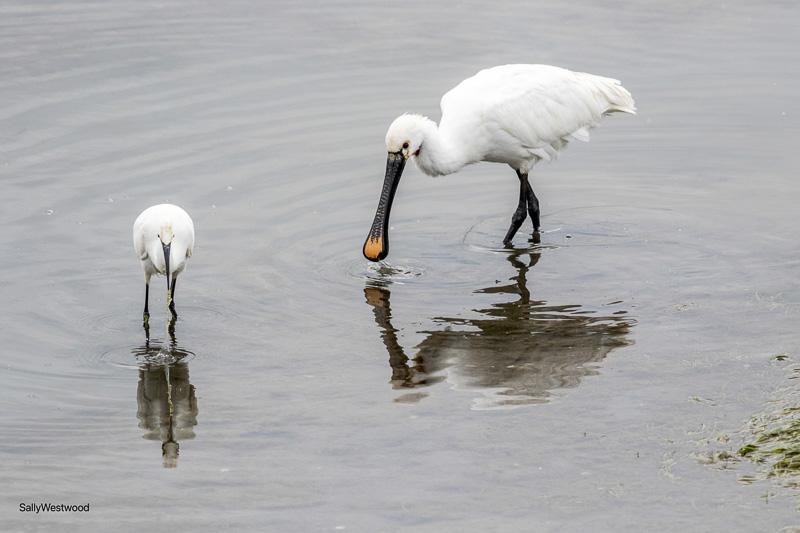 When in breeding plumage the spoonbill has an impressive spread of feathers on its head which form a crest when displaying, it also raises its body feathers.20 Even when sleeping, the feathers are raised in display. It will also use ‘display preening’ behaviour with all feathers raised and feather crest spread out. The stages of the male’s ‘advertising display’ consisting of  raised feathers, raising its rear end, holding its beak down against its chest, and finally, spreading its tail out fully, has only recently been recorded in Britain, at Holkham, in Norfolk.

Spoonbills are on the amber list for conservation importance, mid-way between the red list of species that require urgent action, and the green list of species that occur regularly and are of the least concern in the UK. The Spoonbill is on the amber list because it is a rare breeding bird and falls into the category of being between 1-300 breeding birds.21

Spoonbills feed by sweeping their long flattened bills through shallow water,22 from side to side. Their bill has been adapted to catch prey moving about in the water as a result of the movement of their bills. Spoonbills frequently eat small fish and shrimps.23 They have also been observed eating other items. A Spoonbill was observed catching a large Marsh Frog24 in a salt pan in Hungary in 2007. The Spoonbill struggled to swallow the frog because it spread it’s limbs out as a defensive mechanism. The spoonbill made pressing movements, using its upper and lower mandibles to the body and head of the Marsh Frog and took each limb with its bill and shook the frog from side to side under water to break the limbs. When all the limbs were broken, the spoonbill managed to swallow the frog. The handling of the prey took the spoonbill ten minutes.25 Perhaps understandable since the Marsh Frogs have an abnormally large head for a frog, and can grow as long as 17cms. This form of food is possible for local Spoonbills because Marsh Frogs are a non-native species that were introduced to the UK in the 1930s, in Kent, and their habitat is marshland.26 Spoonbills have also been seen eating vegetation. If a Spoonbill’s habitat becomes flooded they might eat submerged vegetation, rather than eating items of prey that usually eats the vegetation. This form of foraging for food has been observed in Spoonbills in China27 who have been displaced from their usual habitats because of flooding28 such foraging is probably uncommon in Suffolk. 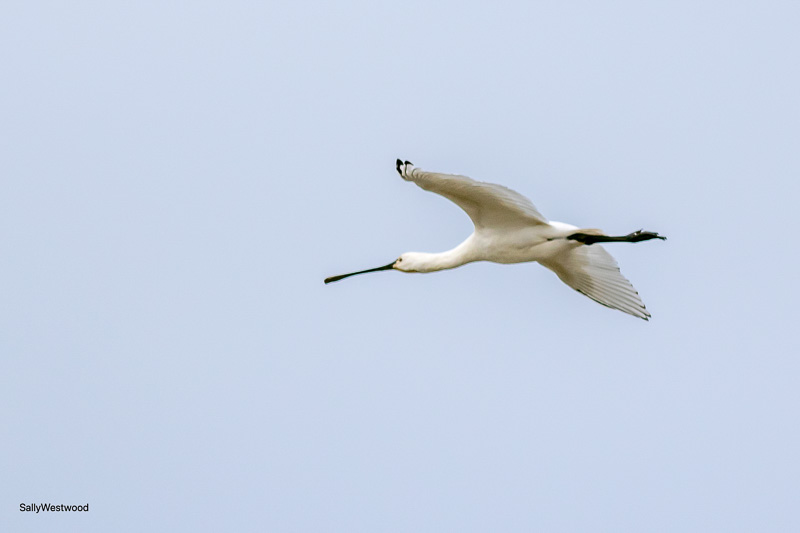 Figure 3: Spoonbill in flight above the Hollesley marshes.