George Turner, whose wife, Grace, used to keep a guest house, Deben House, in Cliff Road, hired out rowing boats. Ivy remembers being charged 4d an hour, and that “some of the hours were quite long”. She also mentions George Stephenson, from 33 Jackson Road, drowning while swimming from the beach. Accounts vary as to exactly what happened, but Mike Nunn, whose father owned the boatyard, clearly remembers rowing nearby. He was only 11 years old, and had his dinghy commandeered by those retrieving his body. Ivy says they were a much more safety-conscious after that.

We first visited Waldringfield in summer 1949, when friends of the family rented a beach hut called Bowships at the foot of the steps down the cliff from the car park. They stayed for a week, during which my father borrowed a boat to sail, my mother painted a picture, and we played in the sand. Very soon afterwards, a decision was made that was to have far-reaching consequences for all of us.

For us children, that week by the river was a treat. It was fun for our parents, too. But it was more than that. It was a taste of something they had hankered after for years. Intangible, hard for them to put into words, but they recognised it easily enough. They had looked over the horizon beyond chickens, tomatoes and glasshouses, and liked what they saw.

Autumn came, and my father was chatting to someone on the LSA Newbourne staff. Mr Green* had a beach hut at Waldringfield in what later became known as the Arab Quarter. Learning that next door to this hut was a vacant plot, my father wasted no time. Over the winter, with the help of Harry Cracknell, he built a twelve-foot by eight-foot beach hut in sections in our piggery. During spring or early summer 1950, the whole structure was taken to Waldringfield, assembled, clad in sheet aluminium, and occupied by five very excited Belchams.

The hut was fondly known as the “biscuit tin”, and is still there – just! Along with the river, beach, sailing club and, later, the Maybush Inn, it was soon playing an essential part in our lives at weekends and throughout the school summer holidays. It continued to do so until the early 1960s, when we three brothers had left home, and our parents sold it to fund a touring caravan. 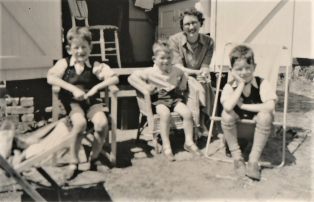 Before we had a car, we had to cycle to and from Newbourne. The logistics of our first visit each year were complicated and exhausting. As we cycled through the village with bags of tins, linen, clothes and toys dangling from our handlebars, we must have raised the odd smile. I can still picture my mother pushing her bike up Samples’ Hill with a meat safe balanced precariously on the handlebars.

Every year we spent all six weeks of the school summer holiday at Waldringfield. Sometimes the five of us would sleep in the hut, but most weekdays my father had to work on the holding, and slept at home. In his twenties, he had learned to sail on the Broads, and soon found a fellow hut-owner to share ownership of a small sailing dinghy. He always tried to keep Saturdays free for sailing, but once he had taught us boys to sail and then to race, he retired to the clubhouse, and helped with race administration. The ladies in the galley, preparing teas for hungry sailors, always welcomed the misshapen – and thus unsaleable – tomatoes and eggs he brought from Newbourne. My mother, if not in the galley, would happily chat for hours on the clubhouse veranda with other mums watching their offspring afloat. 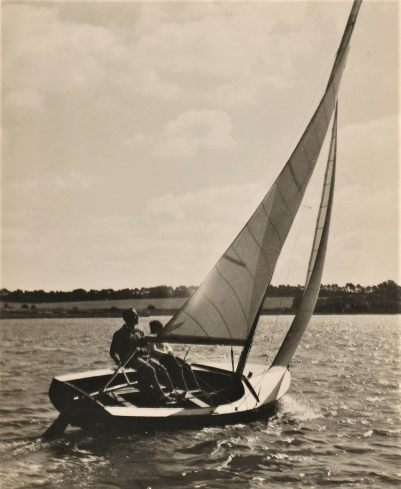 We took to it all like ducks to water. Families picknicked together and looked out for one another. Children played, swam, built dens, learned to sail and row, and got covered in mud. Teenagers raced dinghies, fell in and out of love, learned to dance to Victor Sylvester, drank cider and shandy in the Maybush, and learned to ride with Jasmine and Nettie Allen at Whitehall Farm. Friendships were made that endure to this day.

Newbourne and Waldringfield share a parish boundary. Walking between the village centres is only a gentle stroll. Families in one village have relatives in the other. But this community of beach hut and cara-van owners, centred on sailing club, pub and river, seemed to have little connection with either. In spite of its seasonal nature, close bonds were formed as lives, activities and interests were shared. Out of season, sailing club dances, suppers, lectures and parties helped keep the social pot boiling. So did dinner parties, with their obligatory prawn cocktails and bottle of Blue Nun.

Work on an LSA smallholding was hands-on. It was sweaty and dirty, the hours long and unpredictable, and income depended on factors over which you had little control. You didn’t own your house or your land, and your bosses were elsewhere. Outside interests meant those that lay immediately outside your back door. And most of your neighbours were in the same boat.

Small wonder then that others in Newbourne began to see us – when they saw us, which wasn’t often – almost as outsiders. Our father was chairman of the estate’s Consultative Committee, and our mother was in the WI, and delivered the parish magazine – or “perishing magazine”, as she sometimes called it. But for large chunks of the year, our neighbours were doctors and consultants, teachers and headteachers, insurance professionals and managing directors. Most of our playmates and friends were privately educated.

Our parents didn’t always find it easy to keep up. Without a yacht, they were unable to return invitations to drinks parties on board. Booking tickets for the club’s regular dinner-dances – black tie, of course – required careful budgeting. And a round of whiskeys and G&Ts at the Maybush could seriously damage their wealth.

But they persisted, not primarily for their own benefit but for that of their three sons. When income from the smallholding fell one year, our father went on the road selling some of the early felt tip pens.

Our parents gave us so much. I am always amazed and very grateful when I remember my father’s willingness, when only in his mid-forties, to virtually to give up sailing for good for my benefit. He loved sailing, but sold his own boat so that I could have one to race and call my own. As for our mother, none of us ever knew how she managed to provide meals and clean clothes for us for six weeks each summer, based in less than 100 square feet of beach hut without electricity or running water, and cooking everything on a Primus stove. 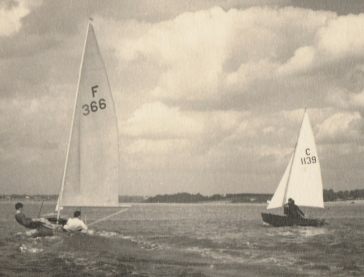 Whatever she did, our mother gave it her all. She not only worked hard at Waldringfield to give us wonderful holidays, she worked like a Trojan at home and, when extra labour was needed, on the smallholding. In spite of a congenital heart defect, and a deformed spine, I never heard her grumble.

But she had been brought up in London and Brentwood. She had attended one of the few grammar schools available in the late 1920s, where she had done well. Her school reports highlighted her ability in art, English and needlework (and, to the surprise of no-one who knew her, warned that “talkativeness” was a hindrance!). Before marriage, she had been employed in a city office. She made clothes, loved to dress up, took care with her appearance, created an attractive garden, painted pictures, and enjoyed drama and music. She loved the woods, streams and meadows surrounding our home, and helped us appreciate them, too.

She also wrote poetry. The following, probably written after many years on the smallholding, may make us smile. But it tells us a lot about its author, and why Waldringfield and all that it involved was embraced with such enthusiasm.

I’m so tired of the wind on the heath, brother!
I hate the things it does to my hair!
And I don’t give a hoot
For that well-cut tweed suit!
I’d like something slinky to wear!

I’m so bored with the salt-of-the earth, brother!
Good chaps, maybe – I don’t care!
I want smooth men in suits,
Not with mud on their boots!
Chanel No.5 – not fresh air!

I’ve had my fill of the peace and quiet, brother!
I need city lights at sun-down.
Traffic noise thrills me,
So what if it kills me,
I want to go back to the town.

I’ve lived too many years in the sticks, brother!
It was nice while it lasted – but please –
I want to revoke
And go back to the smoke,
And be blowed to the birds and the bees!!

[* Mr Green lived in one of the two semidetached cottages between the school and Mill Road in Waldringfield.] 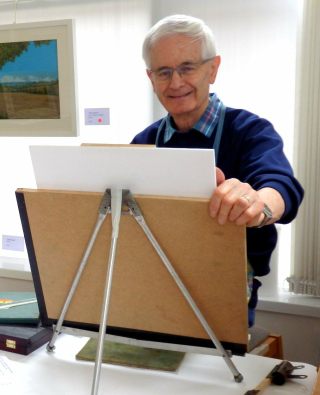 Leigh’s career was in youth work, mainly managing and developing residential Christian youth activity centres and camps. Retirement brought him and his wife Jill back to the Deben in 2002. Living in Felixstowe, they sailed Tamarisk, their 22-foot Pandora International, from Felixstowe Ferry for several years before Leigh teamed up as crew with John Palmer racing Dragonflies at Waldringfield. He was Chair of the RDA for 3 years from 2010, and now spends much of his time pastel painting. His book, Newbourne in short trousers, was published in 2014. He and Jill now live in Warwick to be nearer to family.