A walk along the bank of the River Deben can be interesting whatever the weather. The birds are there, going about their business, searching for food, and perhaps squabbling and arguing about temporary feeding territory. I had a walk along the riverbank towards Wilford Bridge from the direction of Woodbridge, to see what birds were about. The tide was coming in. The weather was bright and sunny. I immediately spotted two huge flocks of Lapwings (Vanellus vanillas) swirling around in the sky. Commonly, Lapwings flock together in the winter months on marshes (Svensson, 2009). They can be identified by their white and black rounded wing-tips showing dark above and white below, moving in a flapping motion. Close up views when stationary, reveal a long thin, wispy head-crest. The winter plumage shows a scaly pattern on their dark upper parts and coverts. This contrasts with their summer plumage, which has a beautiful purple and green iridescence. As they turned, I could see the flickering of the black and white of their wings.

Lapwings eat beetles and earthworms, when feeding on pastoral farmland (Barnard & Thompson, 1985). However, smaller worms are eaten when Black-headed Gulls are close by (Satchell, 2012). The Wetland Bird Survey (WeBS) is a scheme for monitoring wintering birds at wetland sites in the UK. The monitoring is conducted each year by the British Trust for Ornithology (BTO). Interestingly, the BTO have undertaken a count of all wetland birds at 2,847 wetlands in the UK (bto.org, 2019). They have observed that over the course of the past decade 2006/07 to 2016/17, and within those sites, Lapwings have declined by -26% (bto.org, 2019). The nearest wetland to the Deben included in the count, was the Stour Estuary. Just to give you an idea of how many non-breeding birds winter at particular sites, in the winter of 2017/18 the Stour Estuary had 37,929 non-breeding birds present at the site (bto.org, 2019), which represents a figure of 5,000 fewer birds than the previous winter, 2016/2017, of 42,780 birds. 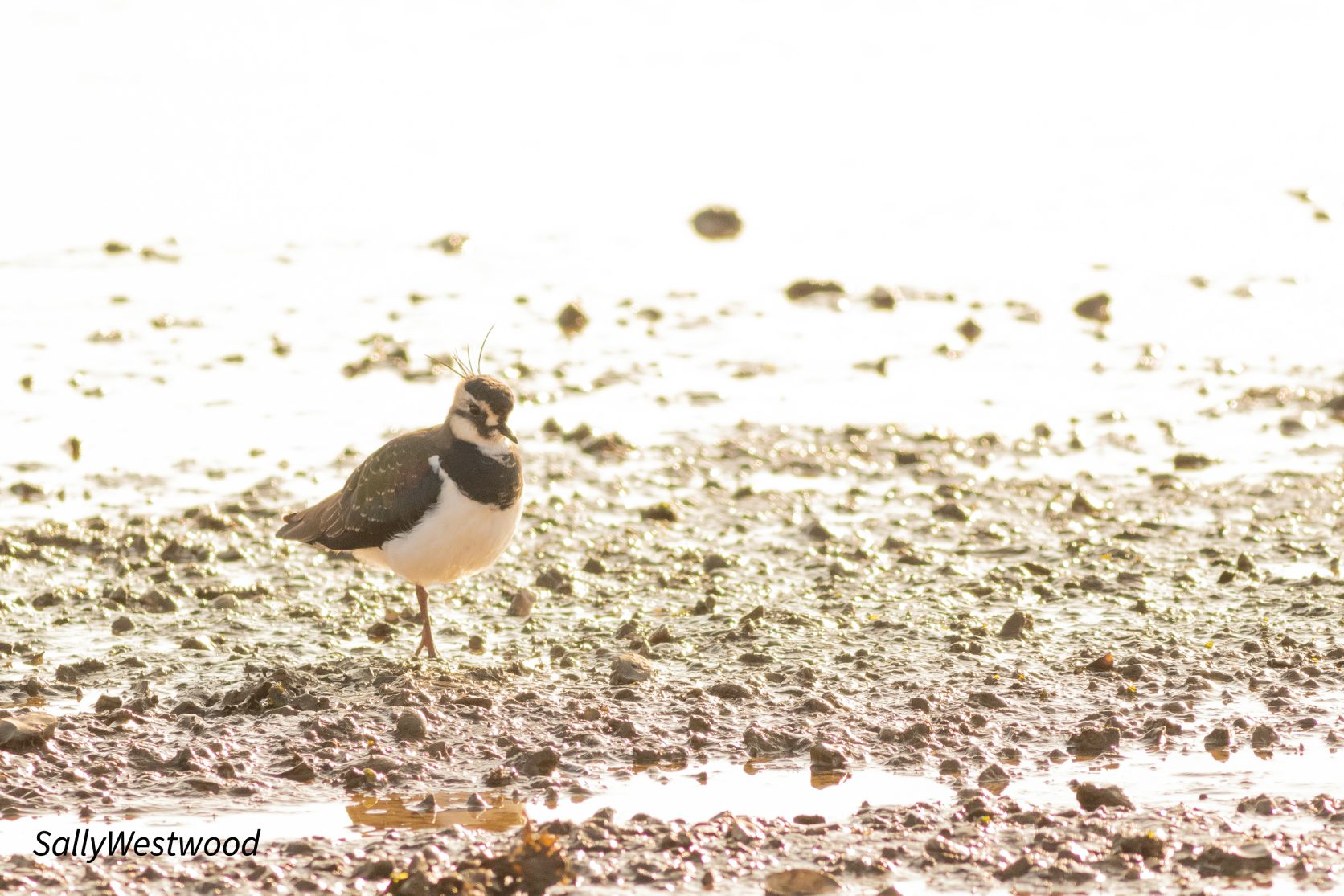 I noticed some dark coloured ducks with their beaks tucked into their shoulder feathers, sleeping at the shoreline. They were Teal (Anas crecca). Teal like the brackish water in this section of the river. They gather in huge flocks, similar to the Lapwing, in the winter months. The Teal is the smallest duck (Svensson, 2009). The adult male has a striking head pattern. It is chestnut with green sides that taper down the back of the head. The dark green has a thin yellow border. It has noticeable pale yellow sides under its tail that can be seen from a distance. The grey body has a horizontal thin white stripe.  As is common in ducks, the adult female is darker than the male, with mottled brown streaks and a dark eye stripe. A small white patch runs horizontally along the base of the tail. At this time of year, Teal generally eat seeds in shallow water, at night (Robinson, 2005). They migrate to Suffolk from their breeding grounds in Siberia and the Baltic (wildlifetrusts.org, 2020), although some do breed in the north of the UK. Teal have increased over the past decade, at particular monitored wetland sites, from 2006/07 to 2016/17, by 15% (bto.org, 2019). This does not represent a consistent increase however, since the twenty-five-year trend showed an increase of 38% between 1991/92 and 2016/17. 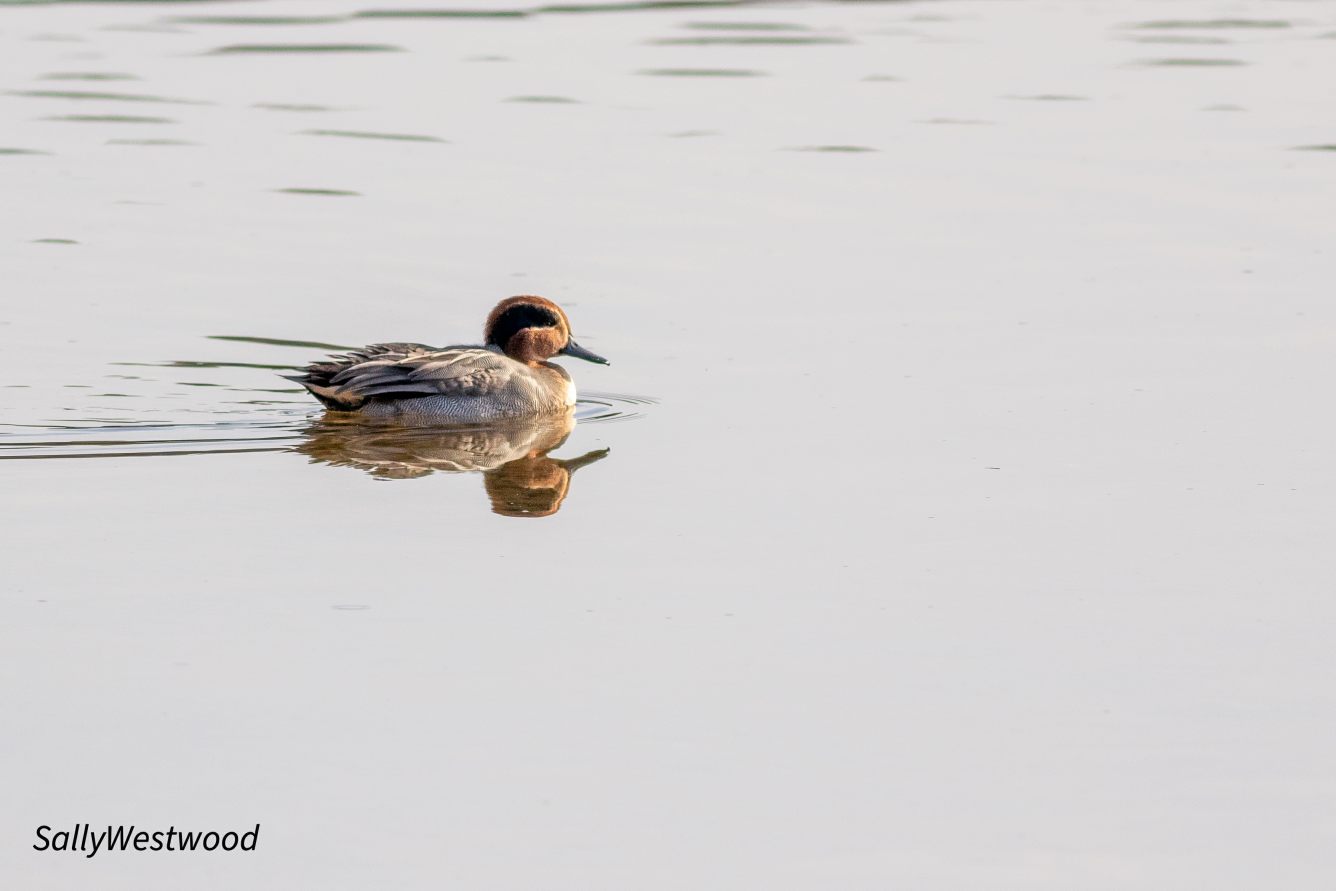 A flock of ducks flew past, along the far side of the river, disturbed by a loud noise, but were too distant for me to identify.  A mixed group of birds also took off, consisting of Black-headed Gulls (Chroicocephalus ridibundus), Great Cormorants (Phalacrocorax carbo), and Mallards (Anas platyrhynchos).

Black-headed Gulls are a relatively small, common species in marshlands, and are very common on the River Deben. They take off to roost at sunset in large flocks. Although trends indicated that Black-headed Gulls were on the decline in 2017/18 (bto.org, 2019), the WeBS survey did not state the amount of decline. During the day Black-headed Gulls defend particular sections of the water, for fishing. They take on adult plumage after one year (Svensson, 2009). Two age groups can be identified. Those in their first year may be first winter or first summer birds, and adult birds. Larger gulls can have three or four age groups, that may make identification rather more complex. The outer wing of all Black-headed Gulls have a white, leading edge, which is distinguishable when the species are in flight.  At this time of year, the adult has a dark ear-spot, reddish-brown legs and a similar coloured bill. The juvenile first winter, has a black tail trim, flesh coloured legs and bill with a black tip, and the same dark ear-spot as an adult. The Black-headed Gull eats insects and earthworms, and is an opportunistic feeder (bto.org, 2020). 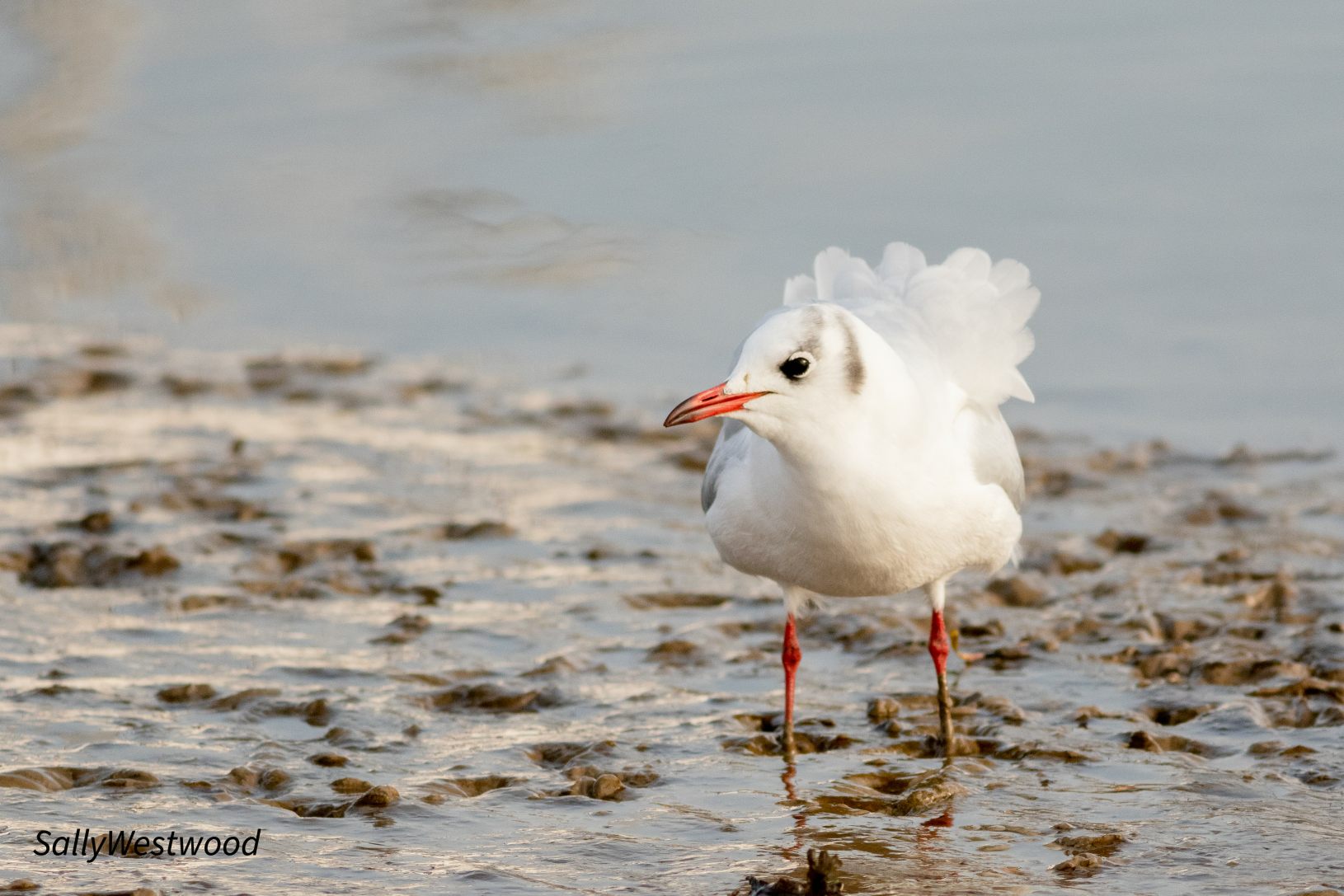 Several Great Cormorants were perched on the branches of dead trees on the opposite side of the riverbank, and had their wings fully extended, to dry them. They frequently nest in trees (Robinson, 2005) and at coastal sites with sandbanks (Svensson, 2009). They appear to be common on the Deben. They have a predominant dark plumage, with a long body, long neck, long beak and long tail (Svensson, 2009). Adults have a dark green and dark blue gloss, that cannot be distinguished from a distance, but may be seen in sunlight. The gloss is less noticeable in winter. The black wings have a hint of bronze and are scaled. The lower mandible has yellow bare skin, the surrounding area is white. A white patch on the thigh is present early on in the breeding season. The juvenile has white underparts and a light grey lower mandible. Its light brown plumage darkens gradually until it becomes an adult, at the age of two years. The Cormorant eats fish (Robinson, 2005). Cormorants have increased over the decade from 2006/07 to 2016/17 by 19% (bto.org, 2019). Once again, this does not represent a steady increase however, trend over twenty-five years shows a considerable increase of 58% between 1991/92 and 2016/17.

There were a small handful of Mallards at the Wilford Bridge end of the Deben. Mallards may be our most familiar duck. They breed in a wide range of habitats including marshes, lakes, and seashores (Svensson, 2009). They are a large, stocky duck, possessing a large head and bill. Perhaps surprising because of their size, they have a short tail. The adult male has a metallic green head, with a thin white collar, a brown breast tinged with purple and a grey body. Black middle tail feathers curl upwards surrounded by black. The Mallard has a dull yellow bill.  The adult female contrasts with the male. It has brown stripes and a dark brown eye stripe. Mallards have a varied diet. They eat seeds, plants, berries, insects and shellfish (rspb.org. 2020). Winter populations of the Mallard ‘have declined since at least the late 1980s’ (Frost, Austin, & Calbrade et al., 2018). More specifically they have declined -14%, over the decade 2006/7 to 2016/17 (bto.org. 2019).

The flock of ducks I couldn’t identify earlier, flew towards me and turned to follow the river towards Woodbridge. They were Shellduck (Tadorna tadorna). Shellducks are slightly larger than Mallards. They prefer areas of shallow water for feeding (Svensson, 2009). They are mostly seen on the opposite side of the river from the footpath, when the extensive mudflats are exposed, enabling them to feed. Their long necks have been referred to as ‘goose like’ (Svensson, 2009). They have plump bodies, long legs, and red bills with a concave culmen and bill knob. Both sexes have similar bold patterns. Their body is predominantly white, and have a dark green head that covers much of the length of their neck. They have a wide russet stripe around the breast, together with a black tip of tail, central stripe on back, flight feathers and scapulars. Adults have pale pink legs and juveniles have grey legs.  The female has a small bill knob which is paler red than that of the male. More Shellduck may be seen on the Deben in the winters to come, since there has been a considerable increase in the population of Shellduck. They have increased in number by ‘300 or more since 1967’ (Woodward, Massimino & Hammond, 2018, p. 6). However, we have more recent statistics from the WeBS counts, indicating that Shellducks are declining significantly, over the decade from 2006/07 to 2016/17 by -18% (bto.org, 2019). The trends for a twenty-five-year period showed a considerable decline of -32% between 1991/92 and 2016/17. It seems that the negative percentage of -18% represents a slight upturn in the winter population of Shellduck, in comparison to the twenty-five-year trend.

A Little Egret (Bubulcus ibis) was searching for food in a hunting spot favoured by Little Egrets, when the tide was coming in. Its body lurching this way and that, stabbing the water with its long black bill, frequently pulling a catch out of the water, a small crustacean or fish wriggling in its bill, as such food was driven in by the incoming time. Little Egrets are ‘opportunistic’ (Kushlan & Hancock, 2005) feeders, much like the Black-headed Gull. They have been observed eating considerable amounts of dragonflies (Cheke & Ashcroft, 2017). When another Little Egret approached, it took off after it, shrieking with indignation, to return after awhile to its feeding spot. Normal state of affairs for the Little Egret. The Little Egret is a white heron (Svensson, 2009). It is tall, slim and elegant. It has long black legs with highly visible yellow toes. Its black bill has grey lores which changes to pink in early breeding season. Two long nape feathers are present when the Little Egret is in nuptial plumage. Little Egrets were not present in significant numbers prior to 2006 in the UK. However, the ten year trend for these birds showed a 47% increase over the decade between 2006/07-2016/17 (bto.org. 2019). 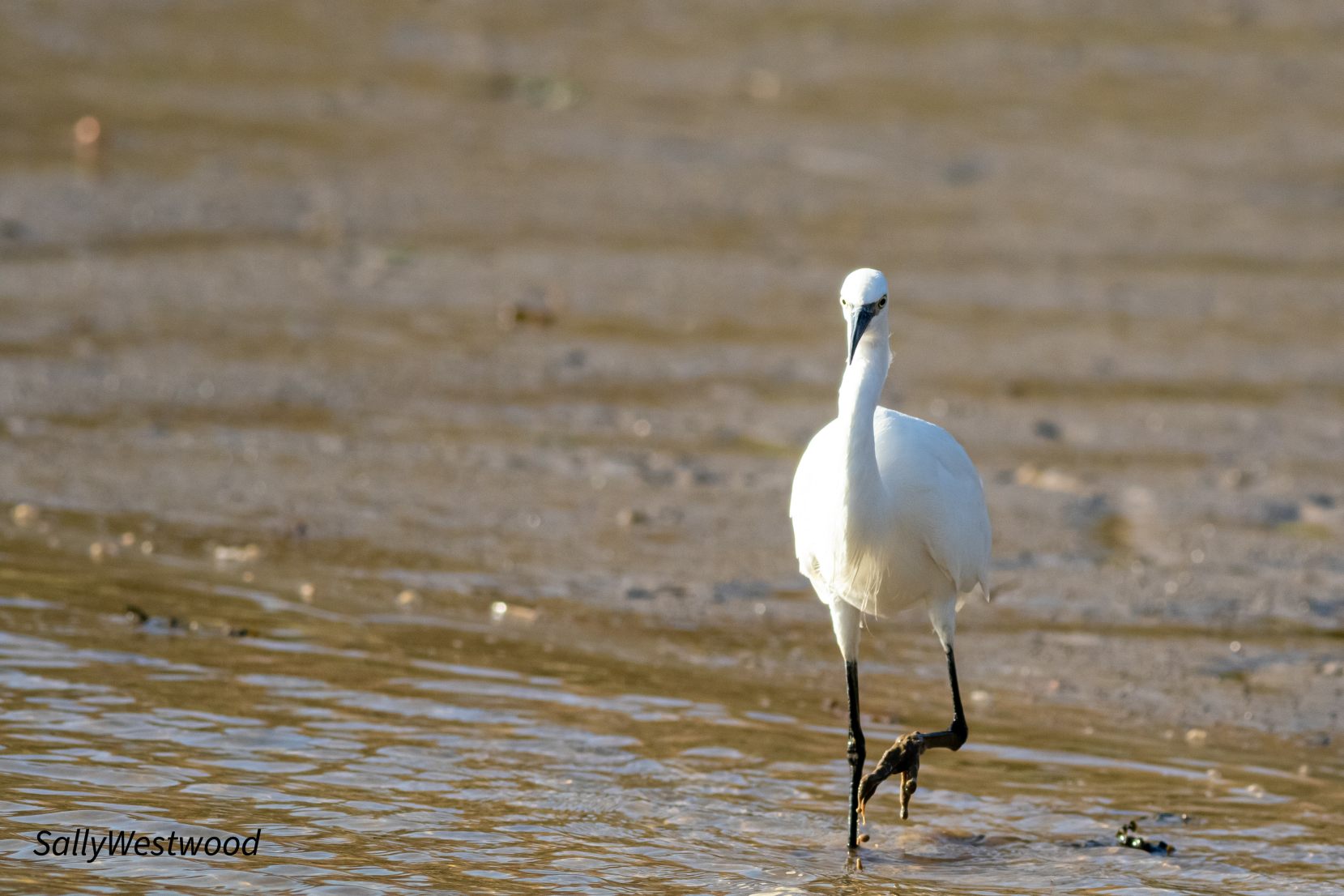 A couple of Canada Geese (Branta canadensis) were standing on the fully exposed central grassy tussocks. They tend to stay mostly on the far side of the river. A large flock were further away on the other side of the river. They appear to keep away from the Mute Swans that patrol this main channel. The pair of breeding swans can frequently be observed enthusiastically defending their territory and can frequently be seen chasing the Canada Geese, and other non-breeding Mute Swans away from this section of the river they hold as their own territory. Canada Geese are large, with long glossy black necks (Svensson, 2009). They have a wide, white neck patch that stretches from the top of the head on one side and goes under the chin to the top of the head on the other side. Canada Geese have a light coloured breast and upper feathers have a white tips. The juveniles are a paler brown. Trends show that Canada Geese have increased by 10% in the ten years between 2007-2017 (bto.org, 2019). This is a statistically significant, doubling of population over a period of 22-49 years (Woodward, Massimino & Hammond, et al., 2018). A similar increase in population size has also occurred for Mute Swans.

Sally Westwood is a Psychologist, and works as a researcher. She has taught in higher education as an English Language teacher. Her interests are varied. She has written many articles for Bird Magazines and Journals. Her next article will be published in Birdwatch magazine in January 2021. She is currently writing a book on Birds in the Rice Paddies of Europe. She is also a professional bird photographer. Birds are her passion. She loves to draw and paint birds. She has lived on a boat on the Deben for the last eight years. She loves to sit and be with the birds, simply watching and photographing birds, in their daily activities.

Barnard, C. J. & Thompson, D. B. A., 1985. Gulls and plovers: the ecology and behaviour of mixed-species feeding groups. Croom Helm.