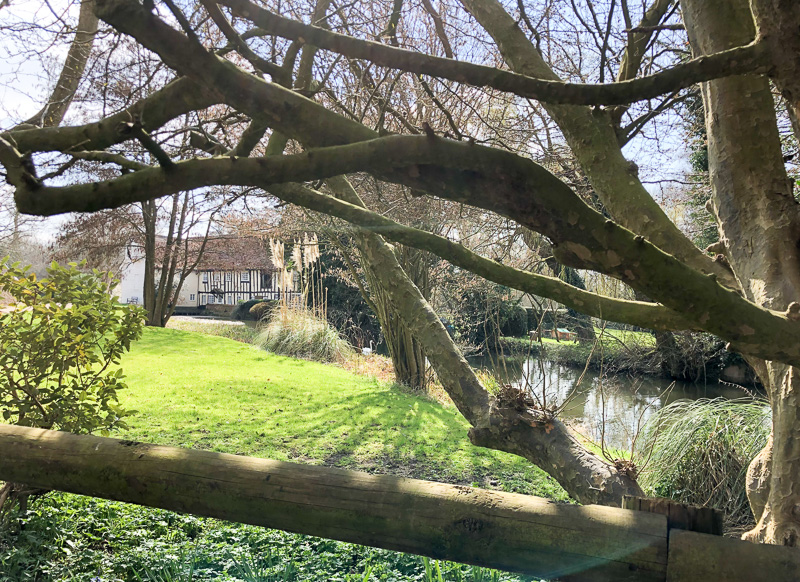 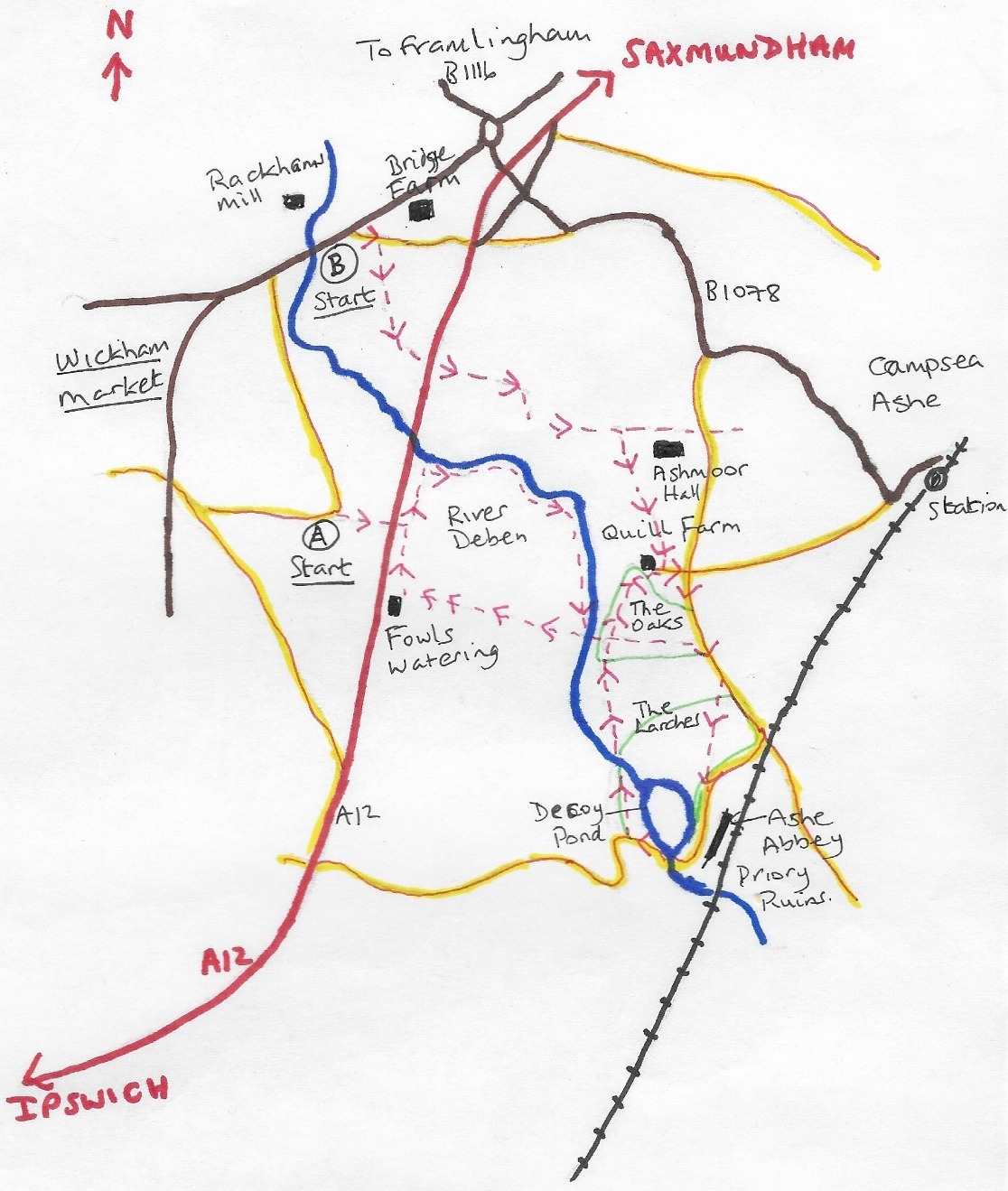 The walk starts to the east of Wickham Market on the track from Mill Lane that leads to waterworks, and a tunnel beneath the A12. (OS Ref 309557).

Pass under the road, turn left at the fence, then right to follow the banks of the Deben as it meanders through water-meadows. These, as many will notice from the A12, are often flooded and consequently the banks can be quite muddy. Nonetheless, wildlife abounds, herons settle in the reedbeds, egrets peck at the earth, buttercups, marsh marigolds and cows’ parsley in turn glaze the sward, cows graze. The river idles, fish swim, anglers sit along the banks catching little, enjoying the sun. 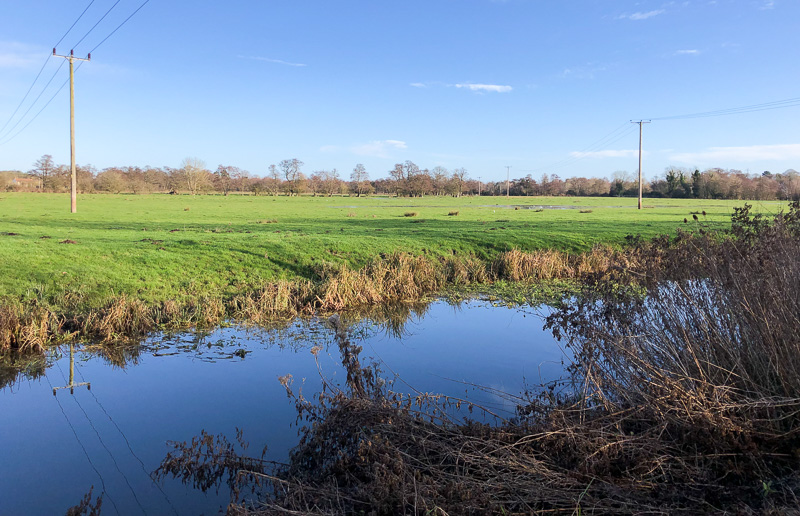 There is a rush of water as the river divides, part of the stream tumbles over Whitebridge weir, where the diverted water dashes into a relief channel for the water mill downstream. From the wooden bridge, turn left to cross the Deben onto a wooded track. Very shortly reach a cross paths, turn left into woodland called ‘The Oaks’, an ancient, coppiced area recorded in the Doomsday book, it is still carefully tended and re-planted. As the trees thin take the steps up behind Quill Farm, so named as it was here quills were used to drain the water when the Deben was diverted in 1204. 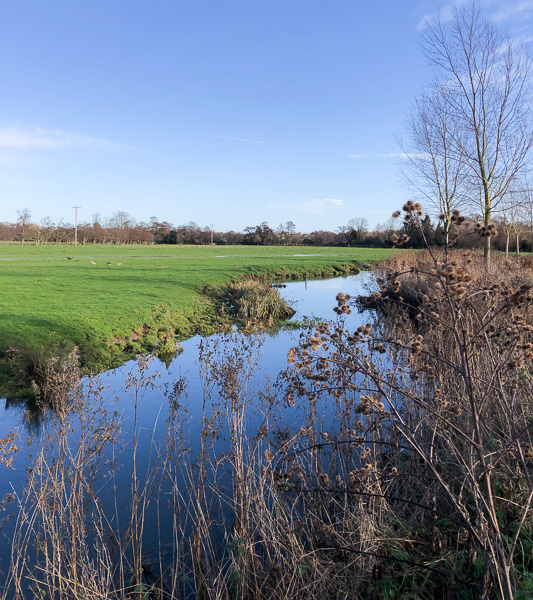 From the steps follow the field edge as it curves right to meet the road at a three-ways. Turn right (signed Rendlesham), and take the second right-hand path, across a field towards the delightful evergreen glade. Through the trees descent to reach a stile and keep right on the road to skirt the edge of Decoy Pond, one of two fishponds that supplied St Mary’s Priory founded in 1195 [2]. Little is left of the original building, as it was confiscated and then largely dismantled in 1536, you can however, see a thatched barn, part of a chapel, and behind the very fine medieval long house, is the Campsea Ashe watermill, the one which necessitated the diverting of the Deben. 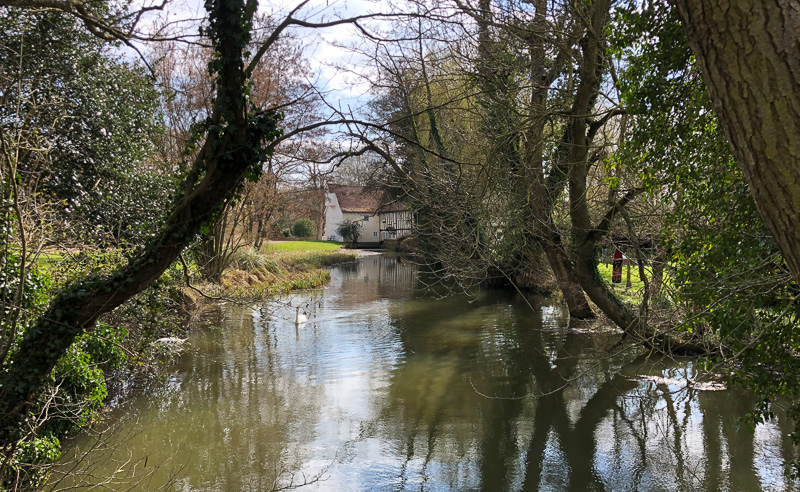 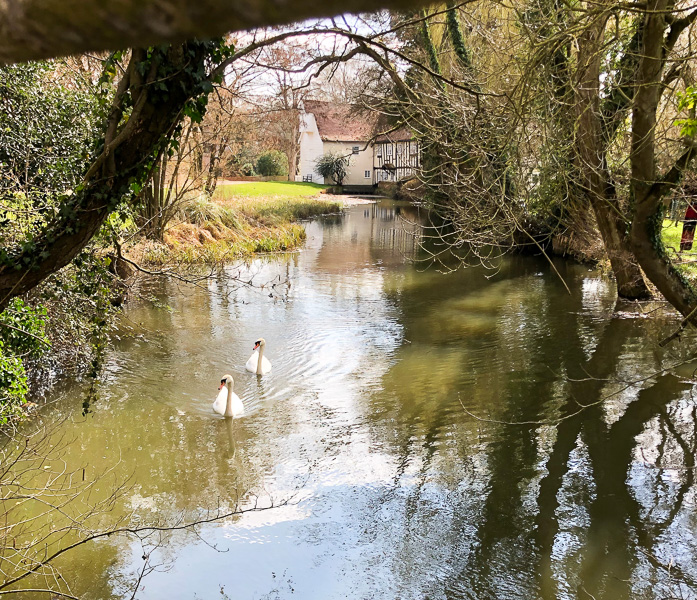 Past the house, it is well worth stopping on the bridge to take in the vista over the Decoy Pond. We saw herons, then three cormorants duck and dive for their dinner. Sometimes, an electric blue flash catches the eye ­— a kingfisher darts. Continue along the lane and very shortly turn right onto a path through a young poplar glade, the delicate light and shade here reminiscent of an impressionist painting. 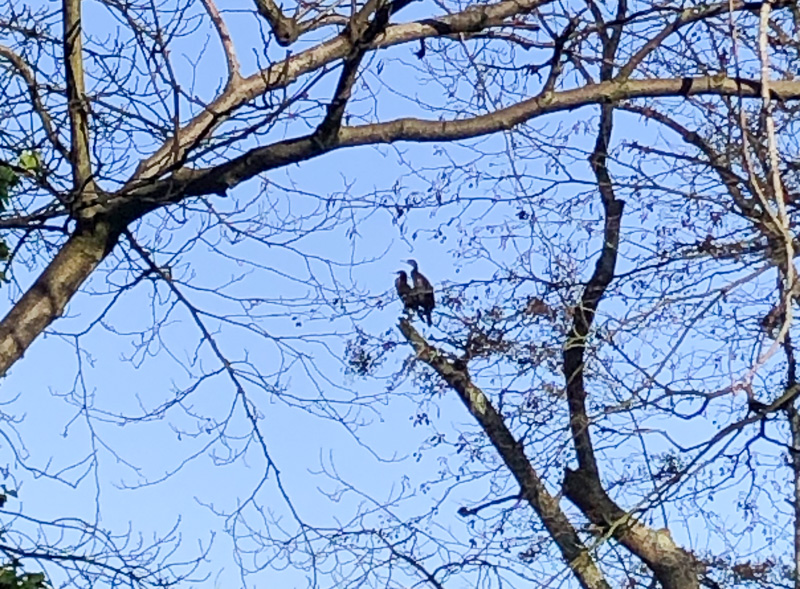 Continue ahead through a gate into a grassy meadow, before reaching the four ways paths encountered earlier. Turn left here and over the bridge bearing slightly left rather than returning along the riverbank. Follow the path to Fowls Watering cottages, turn right along the track back to the tunnel under the A12. The beauty of these meadows only slightly marred by the incessant rumble of the traffic.

This walk can be extended from B (OS ref. 308567) on Ash Lane, to take in Rackham’s Mill and Wickham Market. From Ash Lane take the footpath to meet the above walk at Quill Farm. Follows the same route until passing beneath the A12, turn right and follow Spring Lane into Wickham Market. Turn right at the main road, and cross the bridge at Rackham’s Mill to reach Ash Lane. 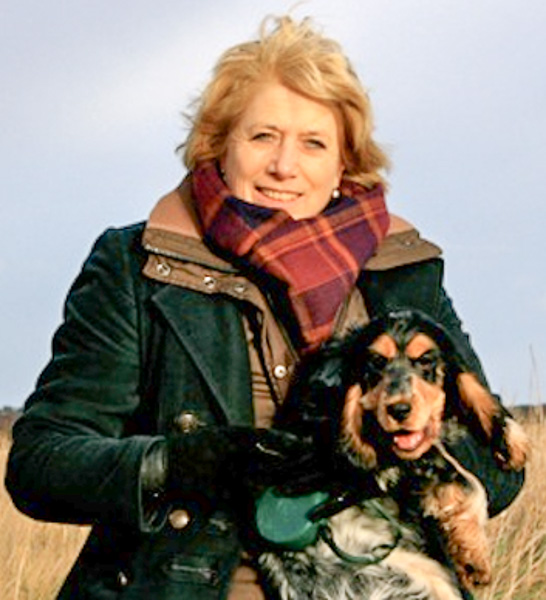 Born in Suffolk, I have a great love for a county that I have explored on foot for as long as I can remember. Slow travel lets me enjoy the landscape; savour its history, flora and fauna. After many years of the London commute, it is such a pleasure to be able to write walks for publication, as well other pieces. Currently I’m interested in the future development of the ‘Slow Ways’ initiative. https://slowways.uk/

[1] Campsea Ashe is mentioned in the Domesday Book as two villages. Campesia, the larger, meaning a small island with field or enclosure. The adjoining village was called Esce – an ancient word for Ash tree.

In 1066 there were about 27 families living in Campesia, with mention of considerable arable land, meadows, 2 mills, and various livestock. The Mill at Ashe Abbey only ceased to be used after WW11.

[2] St Mary’s Priory was founded in 1195 by Theobald de Valoines for his sisters Joan and Agnes. There is also reference to a sister, Matilda of Lancaster, however, she never became a Prioress.

The Priory and Priory church, dedicated to Mary, were constructed mainly in the early C13. It was considered a fashionable religious establishment for women of high birth, Joan de Valoines the first prioress, was followed in 1234 ,by her sister Agnes, after some ecclesiastical disagreements over Butley Priory.

There is evidence that Anglo-Norman was spoken in this aristocratic establishment, and an important book inscribed ‘cest livere est a covent de Campisse’, known as the Campsey manuscript, was used for mealtime readings. It is the only known collection of rhymed saints’ lives written in French. It is now housed in the British Library.

Over the years the priory was linked with many other monasteries and abbeys in SE Suffolk. This commenced under the patronage of the Ufford family in the late C13, before links were established with many estates, secular and ecclesiastical, both locally and throughout England.

The demise of the Priory came at the hands of a local man – Cardinal Thomas Wolsey – who in 1527 was looking for money, building materials and income for his colleges. Many small religious houses were closed, and in 1536 Thomas Cromwell closed those priories that were valued at less than £200.00, and thus Campsea Ashe was lost to the Crown.